“Lifting As We Climb”: The Emergence of an African-Canadian Civil Society in Southern Ontario (1840-1901) 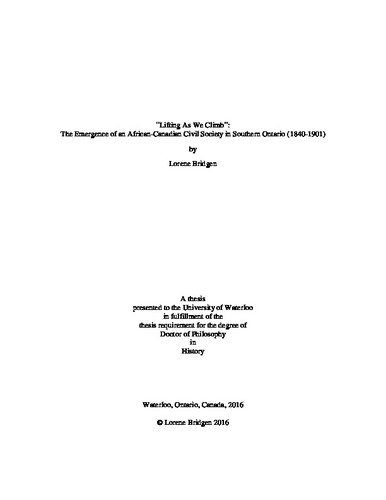 This dissertation examines Black civil society organizations that brought the African-Canadian community closer to their rights as citizens of Canada West from 1840-1901. Past scholars have applied the concept of civil society to White organizations, but the following considers civil society organizations in the context of African-Canadian life. Through a broader discussion of multiple Black cultural organizations, including literary societies, fraternal orders, religious societies, and etiquette groups, “Lifting As We Climb” highlights the community’s training of future activists and the application of the lessons learned within the walls of these groups to “mainstream” society. During the nineteenth century African Canadians experienced the harsh realities that accompanied their newfound freedom in Canada West, particularly from racist Whites. In response, the Black community utilized African-Canadian cultural organizations to create change. “Lifting As We Climb” argues that, while African-Canadian citizens came together through organizational work, for the common and overarching reason of equality, their fight against injustice resulted in the emergence of a Black civil society. Within Black civil society, participants of any “gender,” “class,” or religion had a voice. Through these organizations, African Canadians gained the confidence to the challenge the status quo, but also realized that there would be sacrifices to be made, particularly in terms of their previous political allegiances. This was a change they were willing to make. African-Canadian groups also understood the significant role of children, recognizing that there would be no progress without the next generation, which is why many Black activists invested substantial time and energy into working with children: they wanted to ensure that their work would continue. This dissertation brings to light the numerous contributions of unknown, and well-known, Black activists and organizations, and demonstrates that both leaders and followers could make a difference.