Older Adult Volunteers: Understanding the meaning of volunteering in the transition to retirement 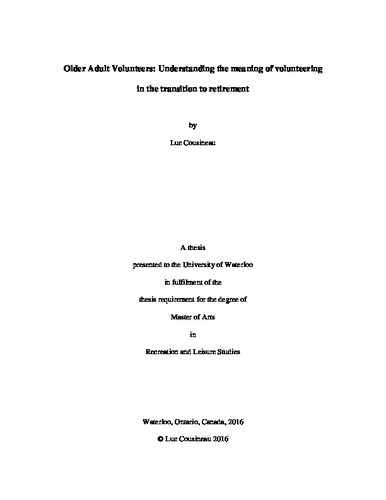 In the fall of 2015, Statistics Canada reported that for the first time in Canadian history that the number of Canadians over the age of 65 was greater than the number of Canadians under the age of 15 (Statistics Canada, 2015). The Canadian federal government projects the trend of an aging population to continue, with the proportion of Canadians over the age of 65 growing even further over the next two decades (Employment and Social Development Canada, 2015). The aging of the baby boom generation into retirement and beyond presents a number of challenges for OECD countries like Canada in funding support programs like the Canada Pension Plan (McMahon & MacQueen, 2014), and in providing adequate and appropriate social programs (McNamara & Gonzales, 2011). It also represents potential opportunities, the most significant of which is an increase in available older adults to work in volunteer roles in the movements and organizations which rely on volunteers to operate in a landscape of increasingly scarce external funding (Kelly & Harding, 2004). For those older adults who chose to volunteer in retirement, their involvement is a way to derive meaning through complex interactions of personal needs and desires which make up the individual’s measures of self-worth, community concept, and the way they identify themselves as a person (Iwasaki, Messina, Shank, & Coyle, 2015). At this time, only about 35% of Canadian adults over the age of 55 choose to volunteer (Turcotte, 2015), but with the size of this population quickly increasing, even a small percentage gain in active volunteers could greatly increase the available volunteer labour in Canada over the next 10 years. The aim of this grounded theory study is to explore the meaning of volunteering in the lives of adults over the age of 55 as they transition into retirement. Specifically, this research addressed the following research question: What role does the volunteer experience play in meaning-making during the transition to retirement among older adults? 15 in-depth, one-on-one interviews were conducted with adults who were over the age of 55, engaged in regular volunteering with a small non-profit organization in their community, and who had retired within the last 5 years, or were in transition to full retirement from career work. Constructivist grounded theory methods were used to collect and analyze the data. Analysis of the data revealed six primary themes which contributed to the meaning of volunteering for older adults as they transitioned to retirement: (1) role identity through the transition to retirement, which included the need for autonomy and personal challenge; (2) confronting aging, health, and dying; (3) the complexities of time use in retirement; (4) facing fear/anxiety about transitioning to retirement, including the loss of purpose and the loss of personal connections; (5) the influence of finances on volunteer decisions; and (6) making a difference in people’s lives, including deriving personal value from helping others and helping in the community. Each of these concepts is discussed as individual and inter-related contributors to meaning-making for older adults as they volunteer in transition to retirement. Analysis also yielded some suggestions for organizational improvements in volunteer recruitment and retention, which are applicable across a variety of non-profit organizational landscapes.