Are There Sex-Linked Differences Across the Longitudinal Axis of the Rat Hippocampus Following Ischemic Injury? 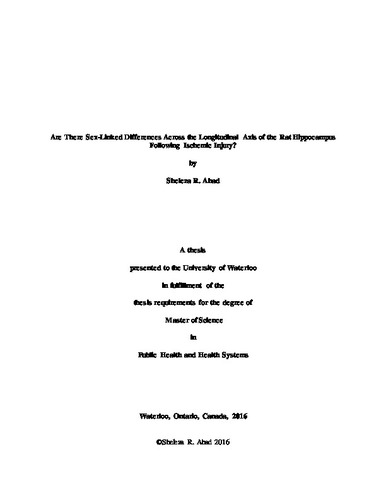 Ischemic strokes occur when an occluded blood vessel limits the delivery of oxygen and nutrients to neurons, and can result in widespread cell death. Although stroke is the third leading cause of death and a major cause of disability among Canadians, the ability to treat this condition is limited, in part, due to an incomplete understanding of the underlying factors that influence cell death. The hippocampus, a structure intimately involved with learning and memory, is highly vulnerable to ischemic brain injury; however, evidence suggests that the various regions of the hippocampus do not respond homogenously to insult. In addition, previous work has shown that differences in response to injury also exist between male and female brain tissue. As a result, the present study aimed to investigate how various factors, including hippocampal region and sex, may influence variability in response ischemic insult. Acute hippocampal slices prepared from the septal and temporal poles of male and female Sprague-Dawley rats were subjected to an ex vivo model of stroke, oxygen-glucose deprivation (OGD). Cell viability assays, which measured mitochondrial function (2,3,5-triphenlytetrazolium chloride metabolism) and cell membrane integrity (lactate dehydrogenase release), were used to examine post-OGD slice viability. To better understand the role that the primary sex hormones, estrogen and testosterone, play in response to neuronal damage, tissue from rats at post-natal day 26-29 (pre-adolescence) was compared to tissue from rats at post-natal day 61-64 (post-adolescence). The findings from this study suggest that hippocampal tissue harvested from the septal pole of male, pre-adolescent, rats displayed the greatest sensitivity to ischemic insult.

Sheleza, Radeyah Ahad (2016). Are There Sex-Linked Differences Across the Longitudinal Axis of the Rat Hippocampus Following Ischemic Injury?. UWSpace. http://hdl.handle.net/10012/10998