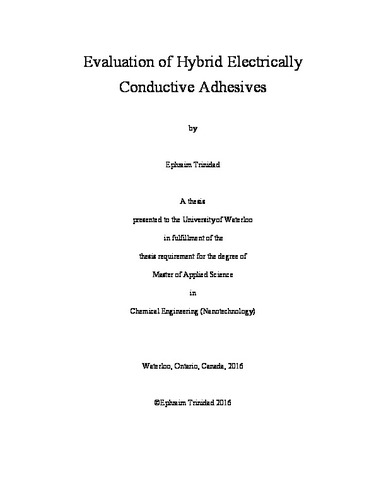 An electrically conductive adhesive (ECA) is a composite material acting as a conductive paste, which consists of a thermoset loaded with conductive fillers (typically silver (Ag)). Many works that focus on this line of research were successful at making strides to improve its main weakness of low electrical conductivity. Most research focused on developing better silver fillers and co-fillers, or utilizing conductive polymers to improve its electrical conductivity, however, most of these works are carried out on small scale. In this work, we aim to produce larger quantities of hybrid ECA to successfully test its properties. Industry is interested in materials with superior physical properties. As such, rheological behavior and mechanical strength were explored as it has been theoretically hinted that incorporation of exfoliated graphene within the composite could impact those factors listed in a positive manner. In the first step of this project, pre-treated sodium dodecyl sulfate (SDS)-decorated graphene’s rheological properties were examined. An epoxy resin diglycidylether of bisphenol-A (DGEBA) was the main polymer used for this study: a well-known material that can behave either as a shear-thinning or shear-thickening material depending on the supplier. We showed how composites that contain graphene (Gr) had higher viscosities than ones that contained SDS decorated graphene Gr(s). Not only did we confirm that surfactant was a key factor in the decrease of viscosity, but we also report how Gr and Gr(s) had a special effect that suppresses the intrinsic shear thickening behavior of epoxy resin at weight concentrations (wt%) higher than 0.5 wt%. The results showed that Gr(s) is not only beneficial in terms of improving the conductivity of conventional ECAs, but it also acts as a solid lubricant that decreases the viscosity of the composite paste at higher weight concentrations. In the second step of the project, pre-treated SDS decorated graphene’s mechanical properties were examined. In specific, its lap-shear strength (LSS) as well as the effect of residual solvent when present in our hybrid ECA system were studied in order to follow up on the thermal results obtained from a previous study. We showed that our initial suspicion was correct as the LSS did decrease for all of the solvent-assisted formulations that contained Gr(s) ranging from 66 to 84%, however, we were not able to tell whether or not that decrease was caused by lower crosslinking density. Instead, we uncovered another reason for this decrease: bubble formation during the curing step. This suspicion was confirmed qualitatively through light microscopy and quantitatively through optical profilometry, where we present an increase in surface roughness for the solvent-assisted samples. Furthermore, by using SEM, we also confirmed that this bubble formation extends throughout the entire bulk material rather than just at the interface. Lastly, we investigated whether the use of solvent to assist in the mixing process significantly improves the electrical conductivity at a lower weight loading of Ag, and compared the electrical conductivity with that of the products prepared under the same higher weight loading of Ag using a solvent-free mixing method from previous work. Thirdly, we investigated another mechanical property of our hybrid ECAs through indentation tests, where we use Hertizan equations to characterize elastic modulus. Since we learned that the addition of Ag flakes is detrimental to the mechanical strength, we focused on the difference between the elastic moduli for Gr and Gr(s) in a solvent-free environment. In the last step of this project, we explored the use of a liquid-suspended co-filler (instead of carbon filler-based materials) in Poly(3,4-ethylenedioxythiophene) polystyrene sulfonate (PEDOT:PSS): a conductive polymer that is frequently in conductive thin-films. We report that by using PEDOT:PSS as a conductive co-filler into the conventional ECA with 60 wt% of Ag, we observed higher conductivity equivalent to adding an extra 20 wt% of Ag into the system. Furthermore, we report that an increase of PEDOT:PSS in the composite appears to decrease the LSS of the material by 20%.