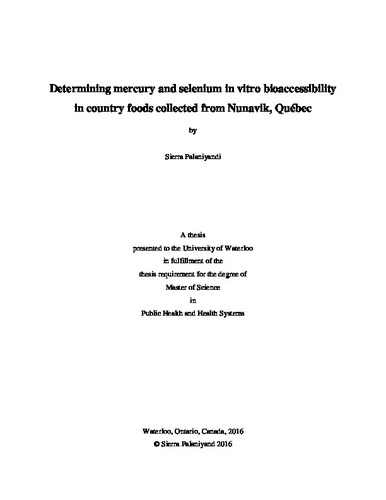 Country food is a cornerstone of cultural, social, and spiritual life for Inuit communities (Gombay, 2005; Van Oostdam et al., 2005). Country foods refer to marine mammals, fish, plants, berries, seabirds and wild game that have been hunted and gathered from the local area (Van Oostdam et al., 2005). These country foods are a significant route of exposure to many environmental contaminants, including mercury (Hg) (Donaldson et al., 2010; Van Oostdam et al., 2005). Mercury can be very detrimental to human health through adverse cardiovascular, endocrine and neurotoxic effects, especially in vulnerable populations such as the elderly or pregnant women (Clarkson and Magos, 2006; Zahir et al., 2005). Despite being a major route for Hg exposure, country foods are very nutritious and contain high levels of numerous vitamins and minerals including the essential micronutrient – selenium (Se), which can potentially mitigate Hg toxicity (Kuhnlein and Receveur, 2007, 1996). An in vitro gastrointestinal model was used to estimate the in vitro bioaccessibility (IVBA) of Hg and Se in certain country foods. We used an in vitro gastrointestinal model to determine the Hg and Se in vitro bioaccessibility for country foods collected from Nunavik, Quebec that have been digested separately and in combination (i.e. single digest and co-digest, respectively). These country food samples were collected 2008-2013 through the community-based sampling programs overseen by the Nunavik Research Centre of the Makivik Corporation. The purpose of this thesis was to determine: (1) Do the Inuit country foods that have high levels of Hg also have high levels of Se? (2) Does the bioaccessibility of Hg and Se vary from one country food to another? (3) Can the co-consumption of specific food combinations affect the solubilization of Hg within the GI tract? For the single digest country foods, we evaluated Hg and Se in vitro bioaccessibility (IVBA) using a two-stage in vitro gastro-intestinal (GI) model for a variety of country foods harvested in Nunavik, Québec. By assessing the IVBA (i.e. the metal fraction of that would is soluble in the gut lumen), we can approximate metal bioavailability (i.e. the metal fraction o that would cross the gut-blood barrier and reach systemic circulation). The results showed a large variation in Hg (1.4 - 90%) and Se (29 - 108%) bioaccessibility for the country foods studied. The samples with the highest Hg concentration (ringed seal liver) also had the lowest Hg percent bioaccessibility. Generally, Se:Hg molar ratios for the majority of country foods increased and they were greater than one after accounting for metal bioaccessibility (i.e. Se bioaccessibility > Hg bioaccessibility). The main exceptions to this trend included the muscle and liver of ringed seals, which showed similar Se:Hg ratios before and after accounting for metal bioaccessibility. Some foods were also co-digested (or co-consumed) meaning they were digested together in the GI model. For the co-digested country foods, we evaluated the Hg and Se in vitro bioaccessibility (IVBA) using a two-stage in vitro gastrointestinal (GI) model for selected country foods. We compared country foods with high levels of total and IVBA Hg (i.e. ringed seal liver, beluga nikku, raw beluga meat, walrus, lake trout, eider duck egg white) and pair them with country foods that may have a mitigating effect on Hg IVBA (i.e. crowberries, blueberries, seaweed, sculpin eggs and tomato paste). Overall, our results show that there are no additive or subadditive results for IVBA Hg when foods were digested together. In the future, this research may aid in the ongoing contaminant exposure assessments in Nunavik and assist in the development of culturally relevant strategies promoting country food use while decreasing Hg body burden.