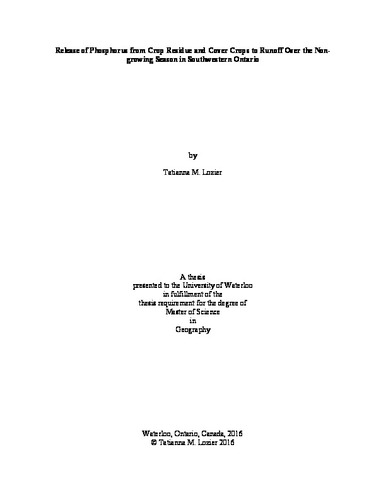 Maintaining crop residue or cover crops on fields during winter is a recommended Best Management Practice (BMP) in temperate regions. However, losses of phosphorus (P) to runoff have been attributed to vegetation following freeze-thaw cycles (FTC). Much of the existing knowledge on P loss from vegetation following FTC has been obtained under severe frost conditions (either simulated or natural). In cool temperate climates, such as Southwestern Ontario, air temperatures are more moderate. Consequently, crop residue and cover crops may be less severely impacted by FTC. An improved understanding of the role of surface vegetation in P losses during the non-growing season (NGS) in cool temperate climate zones is needed to determine if the use of cover crops is suitable for these regions. This thesis addresses two major objectives: (1) to better understand the potential role of hydroclimatic conditions (FTC and hydrological event type) in mobilizing P from crop residue, Triticum aestivum L. (winter wheat), as well as Trifolium pretense L. (red clover) and Avena sativa L. (oat) as cover crops, using laboratory experimentation; and (2) to quantify the release of P from vegetation and soil over the NGS in a field setting, and, determine if changes in water extractable phosphorus (WEP) in vegetation or soil were reflected in loads of dissolved reactive phosphorus (DRP) or total phosphorus (TP) in surface runoff and tile drain effluent. Results from this study revealed that the patterns observed in the laboratory were reflected in the field, where cover crops released more P than winter wheat residue. Oat cover crop was impacted by FTC whereas red clover was not, likely because it had been terminated in early fall using a herbicide. The laboratory and field experiments also demonstrated that potential losses of P from cover crops do not necessarily translate to losses of P in runoff because the mobilization of P in runoff is impacted by both supply and transport processes. Phosphorus leaching and loss from fields are hampered if crops are not inundated/flooded or if surface runoff is limited, but enhanced when vegetation is subjected to prolonged contact with runoff water. The field study demonstrated that although P appeared to have been mobilized from both vegetation and soil pools during the NGS, loads of DRP P and TP leaving the fields were small in comparison, suggesting that much of the P released was retained within the field rather than lost in runoff. This study provides insight into the timing and magnitude of P release from vegetation throughout the NGS in regions with a cool temperate climate and provides an improved understanding of the contribution of cover crops to winter P losses.

Tatianna Lozier (2016). Potential and Observed Release of Phosphorus from Crop Residue and Cover Crops Over the Non-growing Season in a Cool Temperate Region. UWSpace. http://hdl.handle.net/10012/10987