New Ruins: The Decline and Regeneration of Council Housing 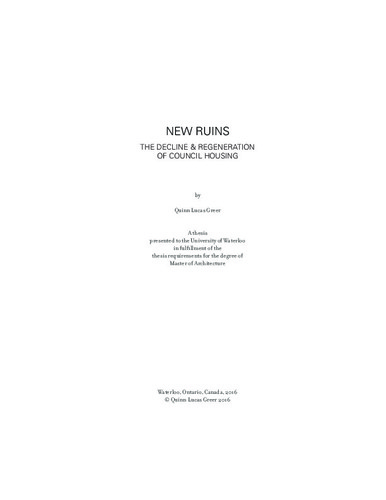 The thesis explores the emergence, decline, and regeneration of council housing in the United Kingdom, and specifically London. It presents a conception of housing as a commodity derived from Arjun Appadurai’s The Social Life of Things, suggesting that commodities possess “a particular type of social potential”, a value realised only in their use or consumption.[1] Housing understood in these terms provides an essential utilitarian and social function as a means of shelter, the domain of human association and its reproduction. Recognising a need for consistent, sanitary, and fairly priced housing, the 1890 Housing of the Working Classes Act established the role of the state in maintaining quality standards of living as a right. Council housing, housing built and maintained by local authorities directly mobilised the social potential of housing as a commodity. Within a restricted commodity context, its value was realised through its consumption – a domestic use-value realised through rent. The strategic removal of council housing from this restricted commodity context was promoted as a progressive redistributive policy under Thatcher as “the Right to Buy”. Through the diversification of tenure, it has enabled the transfer of housing capital from local authorities to stable council tenants, establishing a “property-owning democracy” while reducing council housing stock and the presence of the welfare state. Since 1980, the right to buy and subsequent housing reforms have promoted a political and idealogical disinvestment from council housing, intensifying the process of its social, and economic devalorization. The thesis examines the regeneration of council housing as the product of two parallel processes each manipulating the ground rent or land value of a given site. In this way, the gentrification of council housing is directly initiated by local and regional authorities. Though maintaining a rhetoric of social improvement, the neoliberal strategies promoted by such practices instead intensify the social exclusion and deprivation it alleges to address. The gentrification and demolition of council housing concludes a broader historical narrative describing its slow deliberate privatisation, and diminishing value ascribed to the state provision of housing, since its peak in the 1970s. Appropriating the new ruins of the welfare state as sites of agonistic potential within the city, the project demands a theoretical re-foundation, and critical recuperation of the social and ideological objectives of council housing. Mobilising the latent social potential of housing as a commodity it describes a projective model of development separating financial form and social function. The project pursues the financialization of property under neoliberalism to its most illogical extremes, abstracting housing from the financial armatures that enable investment in the built environment. Specifically, it proposes the development of high quality, permanently affordable housing realised through the exploitation of speculative property investment. [1]: Arjun Appadurai, The Social Life of Things: Commodities in Cultural Perspective (Cambridge: Cambridge University Press, 1986), 6.