Language Shift Processes in the German-speaking Community of Waterloo Region 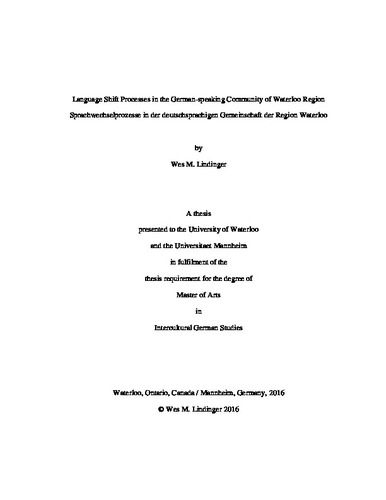 This Master’s Thesis is an analysis of the language shift process in the German-speaking community in Waterloo, Ontario, Canada. Through the analysis of 110 transcripts of interviews with members of this community, the transmission of German to the third generation and the influencing factors thereof will be examined. The interviews used for this analysis were collected through the Oral History Project conducted by the Waterloo Centre for German Studies. Through the examination of existing research on the topic of language shift from linguists including Uriel Weinreich, Joshua Fishman, Calvin Veltman, and Alejandro Portes, the potential factors for the transmission of a heritage language to the third generation will be extrapolated. Through an overview of demographic data pertaining to the concentration of German-speakers in the region, and a corpus driven analysis, the 110 transcripts will be contextually analysed for the presence of the following factors leading to the transmission of German to the third generation: (1) the ability of both parents to speak German; (2) the presence of the same variety of German being spoken by the parents; (3) the possibility to gain an education in German. These potential factors play an important role in the examination of language shift in the Waterloo Region’s German-speaking community, though the findings are ultimately unable to confirm these factors as necessary for the transmission of German to further generations. Several observations and trends regarding the language shift process are nevertheless found and discussed, along with their implications for the German-speaking community in Waterloo, and for future research both specific to Waterloo Region and to the broader study of language shift and minority languages.