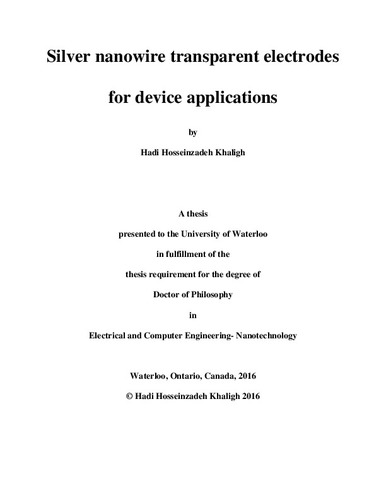 Random networks of silver nanowires are a promising option to replace conventional transparent conductive oxides, such as indium tin oxide (ITO), which are expensive, brittle, and require high temperatures and vacuum during deposition. In this work, silver nanowire transparent electrodes are fabricated with similar optoelectronic properties as ITO, while having a more convenient deposition process and being both cheaper and more mechanically flexible. Alongside these benefits, however, are some technical challenges that need to be addressed before nanowire electrodes can be widely used in commercial electronic devices. Firstly, the high surface roughness of the nanowire electrodes can cause issues such shorting when they are integrated into thin-film devices. A simple hot-rolling method was studied to embed the nanowires into the surface of plastic substrates, which reduces both the surface roughness and nanowire adhesion. A second issue with nanowire electrodes is the Joule heating that occurs when they conduct current for long periods of time, as is the case when used in solar cells and light emitting diodes. It is shown that the current density in the nanowires is both much higher and non-uniform than in a continuous film such as ITO. This leads to localized temperatures of 250 °C or more when conducting current levels encountered in organic solar cells and OLEDs. These temperatures accelerate electrode breakdown. A passivation layer of reduced graphene oxide is deposited on the nanowire films to slow their degradation. However, Joule heating still occurs and the electrodes fail due to melting of the plastic substrate. Recommendations for managing these adverse effects are proposed. To expand the application of silver nanowire transparent electrodes, they are integrated into polymer dispersed liquid crystal (PDLC) smart windows for the first time. Not only are the materials and fabrication costs of the nanowire electrodes less than ITO, but the resulting smart windows exhibit superior electro-optical characteristics. In another application, silver nanowires in conjunction with Al-doped ZnO (AZO) are developed as a conformal and transparent electrode to improve the efficiency of 3D solar cells. Lastly, a simple method of growing AgCl nanocubes directly on silver nanowires is introduced, which can have applications in surface enhanced Raman spectroscopy (SERS) and photocatalytic reactions.