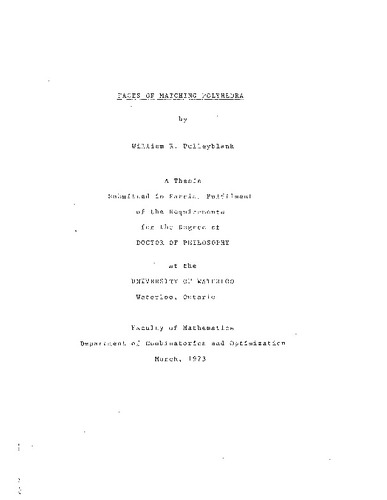 Let G = (V, E, ~) be a finite loopless graph, let b=(bi:ieV) be a vector of positive integers. A feasible matching is a vector X = (x.: j e: E) J of nonnegative integers such that for each node i of G, the sum of the over the edges j of G incident with i is no greater than bi. The matching polyhedron P(G, b) is the convex hull of the set of feasible matchings. In Chapter 3 we describe a version of Edmonds' blossom algorithm which solves the problem of maximizing C • X over P (G, b) where c =. (c.: j e: E) J is an arbitrary real vector. This algorithm proves a theorem of Edmonds which gives a set of linear inequalities sufficient to define P(G, b). In Chapter 4 we prescribe the unique subset of these inequalities which are necessary to define P(G, b), that is, we characterize the facets of P(G, b). We also characterize the vertices of P(G, b), thus describing the structure possessed by the members of the minimal set X of feasible matchings of G such that for any real vector c = (c.: j e: E), c • x is maximized over P(G, b) J member of X. by a In Chapter 5 we present a generalization of the blossom algorithm which solves the problem: maximize c • x over a face F of P(G, b) for any real vector c = (c.: j e: E). J In other words, we find a feasible matching x of G which satisfies the constraints obtained by replacing an arbitrary subset of the inequalities which define P(G, b) by equations and which maximizes c • x subject to this restriction. We also describe an application of this algorithm to matching problems having a hierarchy of objective functions, so called ''multi-optimization'' problems. In Chapter 6 we show how the blossom algorithm can be combined with relatively simple initialization algorithms to give an algorithm which solves the following postoptimality problem. Given that we know a matching 0 x £ P(G, b) maximizes c · x over P(G, b), we wish to utilize 0 X which to find a feasible matching x' £ P(G, b') which maximizes c • x over P(G, b'), where b' = (b!: i £ V) ]_ vector of positive integers and arbitrary real vector. c=(c.:j£E) J is a is an In Chapter 7 we describe a computer implementation of the blossom algorithm described herein.