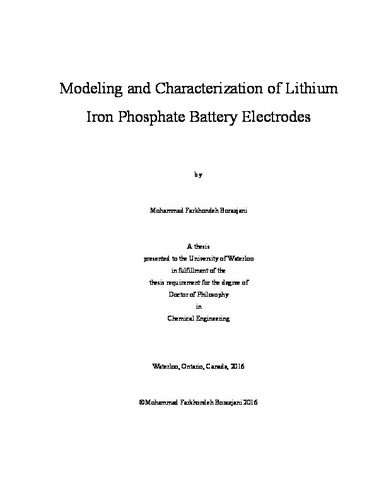 A detailed understanding of lithiation/delithiation dynamics of battery active materials is crucial both for optimizing the existing technologies and for developing new materials. Among all, LiFePO4 (LFP) has been subject to intensive fundamental research due to its intriguing phase-transformation dynamics which, unexpectedly, yields an outstanding rate capability and a long cycle life for electrodes made of this insertion material. In this thesis mathematical models are used as cheap and simple tools to investigate the electrochemical performance of LFP electrodes. The thesis begins with the investigation of the solid-state transport (bulk effects) and electronic conductivity (surface effects) of LFP by means of variable solid-state diffusivity (VSSD) and resistive-reactant (RR) models, respectively. Both models are effectively validated against experimental galvanostatic discharge data over a wide range of applied currents. However, a very small solid-state diffusion coefficient (~〖10〗^(-19) "m" ^2 "s" ^(-1)) is required for both models to fit the experimental data. VSSD model features a particle-size distribution (PSD) which is estimated via model-experiment comparison. The fitted PSD, which is a geometric property and essentially invariable, requires to be different at different rates for the model to match experimental data; it is shifted towards smaller particles in order to accurately predict the electrode performance during galvanostatic discharge at higher applied currents. A contact-resistance distribution (CRD) replaces the PSD in the RR model. The fitted CRD turns out to be extremely broad spanning from ~1" to " ~〖10〗^2 "Ω" "m" ^2. Next, following recent observations of ultra fast lithiation/delithiation of LFP, a simple mesoscopic model is developed which, in contrast to the first part of this research, completely disregards solid-state diffusion limitations. Instead, the model accounts for the inherent inhomogeneity of physico-chemical properties and bi-stable nature of phase-change insertion materials such as LFP with no consideration of any geometric detail of the active material. The entire active material domain is discretized into meso-scale units featuring basic thermodynamic (non-monotonic equilibrium potential as a function of composition) and kinetic (insertion/de-insertion resistance) properties. With only these two factors incorporated, the model is able to simultaneously explain a number of unique features associated with lithium iron phosphate electrochemical performance including the quasi-static potential hysteresis, high rate capability, cycle-path dependence, mismatch in electrode polarization during GITT when compared with continuous cycling at the same current, bell-shaped current response in PITT and the most recently observed memory effect. Detailed analysis of the electrode dynamics suggests that a necessary condition for the memory effect to appear in an LFP electrode is the existence of a non-zero residual capacity at the onset of memory-release charging which may originate either from a non-zero initial SOC or from an imbalanced writing cycle. A memory effect should therefore not be observed in an electrode that has been preconditioned at extremely low currents (i.e., zero initial SOC) and has undergone an extremely slow memory-writing cycle (i.e., approaching a balanced cycle). In the next step, the mesoscopic model developed at the unit level is incorporated into porous-electrode theory and validated by comparing the simulation results with experimental data from continuous and intermittent galvanostatic discharge of a commercial LiFePO_4 electrode at various operating conditions. A bimodal lognormal resistance distribution is assumed to account for disparity of insertion dynamics among elementary units. Good agreement between the model and experimental data confirms the fidelity of the model. Investigation of three different GITT experiments suggests that the slow evolution of electrode polarization during each current pulse and the subsequent relaxation period is contributed by the inter-unit rather than intra-unit Li transport in LiFePO_4 electrodes. As such, GITT experiments once formulated for the determination of diffusion coefficient of inserted species in solid-solution systems may also be used to estimate the single-unit equilibrium potential (i.e., thermodynamic properties) as well as the dynamic properties (e.g., resistance distribution) of phase-change insertion materials. Further analysis of the GITT experiments suggest that, depending on the overall depth-of-discharge of the electrode and the incremental depth-of-discharge of each GITT pulse, the solid-solution capacity available in the Li-rich end-member may be able to accommodate Li insertion entirely without the need for active (closed-circuit) phase transformation. Instead, redistribution of Li among units during relaxation equilibrates the solid-solution composition by transforming a few Li-poor units to Li-rich ones. Despite rigorous research in the literature, this thesis presents the first attempt to quantitatively explain the above-mentioned irregularities simultaneously using a single unifying model and pinpoint the dominant contributing factors under various operating conditions. A realistic account of porous-electrode effects in the experimental validation of the mesoscopic model requires accurate estimation of the electrolyte transport properties. In addition to the modeling of phase-change electrodes, this thesis work presents a novel four-electrode-cell method to determine transport properties and the thermodynamic factor of concentrated binary electrolytes. The cell consists of two reference electrodes (i.e., potential sensors) in addition to the working and counter electrodes. The sensors measure the closed-circuit as well as open-circuit potential in response to an input current across the working and counter electrodes. The new method requires the application of only a single galvanostatic polarization pulse and appropriate concentration-cell experiments. By fitting a suitable model to the data obtained from these experiments, the three independent transport properties of a concentrated binary electrolyte, namely, ionic conductivity, diffusion coefficient and transference number as well as the thermodynamic factor can be determined. In particular, the measurement of the closed-circuit potential using this cell provides a simpler and essentially more accurate means to estimate the transference number than the conventional semi-infinite diffusion method.