A. Schopenhauer and F. Dostoevsky: Some Philosophical and Literary Parallels 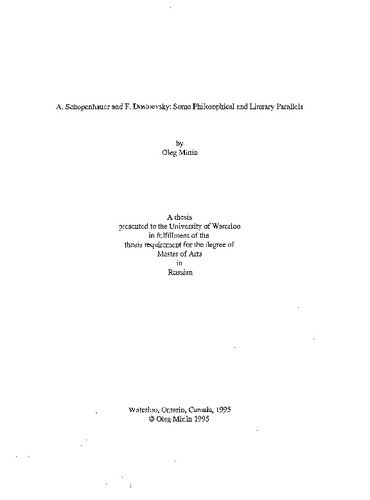 This thesis juxtaposes the philosophical theories of Arthur Schopenhauer with themes and characters in Fyodor Dostoevsky's major fictional works of the middle post-Siberian period (1863-1871). Of particular interest is the theme of will, which is prominent in both Schopenhauer's philosophy and Dostoevsky's fiction. The theme of will is discussed firstly, with relation to the notions of will as a thing-in-itself and with relation to the notion of will-to-live. Particular attention is rendered as to how Schopenhauer explains the relationship between will and reason. Then, a portrayal of this relationship, which is similar to Schopenhauer's, is _inferred from an examination of Dostoevsky's Notes from Underground. The philosophical argument expressed by the Underground Man, is viewed in the context of the socio-literary debate with Chemyshevsky and in the context of Schopenhauer's explanation of the will-reason relationship. As well, the Schopenhauerian notion of the will-to-live is applied to the analysis of some of the main characters of Dostoevsky's fiction, such as Raskolnikov, Svidrigailov, Ippolit and Stavrogin. Chapter I of this thesis, is devoted to exploration in the area of literary history. The purpose of this is to establish the hypothesis that Dostoevsky was acquainted with the philosophy of Schopenhauer. Following this brief survey, Chapters II and Ill, are devoted to reflections on and explanations of the concepts of will in Schopenhauer's philosophical works and its presence in Dostoevsky's fiction. The emphasis is on the relationship between will and reason, and the notion of the will-to-live. Chapter N contains an inquiry into the theme of suicide in both Schopenhauer and Dostoevsky. Such an inquiry reveals another example of thematic affinities between the two. Chapters V, VI and VII, are devoted to an analysis of Dostoevsky's characters with relation to suicide and Schopenhauer's notion of the will-to-live. The final chapter attempts to draw general conclusions from the evidence which emerges from this examination, as well as to further the thematic parallels between Schopenhauer and Dostoevsky regarding the theme of suffering.