Towards a Better Understanding of the Na-O2 Battery System 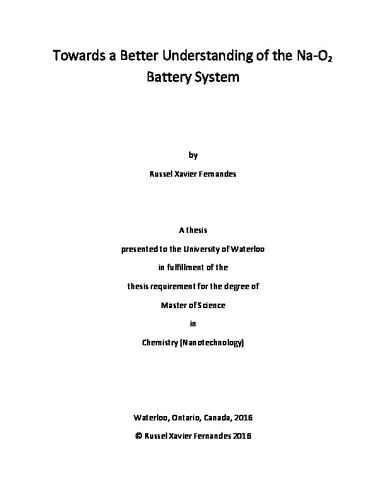 The electrification of transportation requires cost-effective energy storage systems with high energy densities. Aprotic sodium-oxygen batteries offer great promise for advanced energy storage as these batteries possess lower charge overpotential and higher reversibility, when compared to their lithium-oxygen battery cousins. To bring aprotic sodium-oxygen batteries closer to commercialization, a deeper understanding into the underlying cell chemistry and its limitations is required. In this thesis, phase-transfer catalysis is shown to be responsible for the growth and dissolution of cubic sodium superoxide crystals and the reversible cell capacity. In the absence of phase-transfer catalysis, quasi-amorphous sodium superoxide films are formed, and cells exhibit negligible capacity. Similar effects were also observed in lithium-oxygen cells. Following this result, direct evidence of solution-mediated superoxide transport in the sodium-oxygen cell is revealed. Using ESR spectroscopy coupled with parallel SEM studies, hydroperoxyl (HO2) radicals were successfully spin-trapped via reaction with 5,5-Dimethyl-pyrroline N-oxide at different electrochemical stages, allowing monitoring of superoxide production and consumption during cycling. On discharge, the variation of superoxide content in the electrolyte, and its correlation with the crystallization of cubic sodium superoxide agrees with the classical LaMer mechanism of nucleation and growth. On charge, the oxidation of sodium superoxide, through reverse solution processes, reduces the superoxide content in the electrolyte and lowers the charge overpotential. Interestingly, the addition of H2O in the electrolyte significantly increases the concentration of soluble superoxide. Furthermore, carbon-centered/oxygen-centered alkyl radical intermediates are identified, and they arise from the attack of HO2 intermediates on the diglyme solvent. Finally, the growth of sodium dendrites on the anode and the electrochemically inert by-products that passivate the cathode are revealed as the primary causes for early cell termination of sodium-oxygen batteries. The research presented here leads to a new understanding into the aprotic sodium-oxygen chemistry that, significantly, extends to lithium-oxygen batteries and explains their different behaviour.