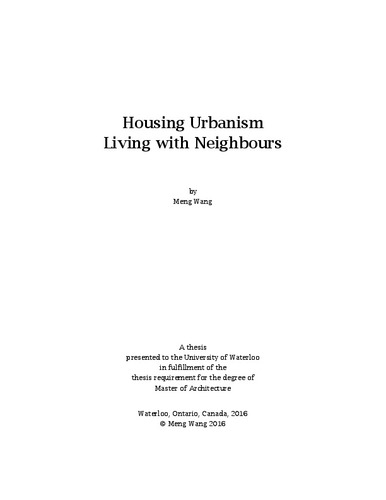 My thesis explores how new social relationships can be reinforced by architectural spaces in residential projects in today’s complex, cross-cultural, political, and economic urban conditions. In Toronto, some newer types of construction often lack the same potential for people to connect and feel accepted within a community. Especially in newly constructed condo projects and suburban houses, Toronto is losing much of its social heritage. Corresponding with the City of Toronto’s appeal for better community housing, this proposal presents a new type of lifestyle, hybrid and vital living in a social-dynamic community. My hypothesis is that the degree of social cohesiveness in a residential project is impacted by its spatial forms. In this regard, the research is conducted on both spatial and social aspects so that a conclusion can be drawn from a cross-projects analysis. Hutong life in Beijing, presented as an ideal urban living precedent has a similar social bond. Based on the spatial form in Hutong, space regulation becomes the original strategy in the proposal. John Holland proposed a methodology of constrained generating procedures. Two models comprise this modeling system: the static model stands for physical forms, such as maps and architecture; the dynamic model discovers the “rules of the game” that allow systems to change their forms. By importing the concept cohort as the basic living cluster, the spatial hierarchy has been set up as the static model, which becomes the bottom-up architectural form for generating a community. The dynamic model that represents the emergence of bottom-up social interaction is approached by setting up the rules, which include social programs, such as social activities for different scenarios, autonomous clans, or commercial behaviours. Spontaneously, the new social network within this community forms. This generating process abstracts residences from cities as an independent self-organizing system that implies in a residential community.