Identity and Economy: Mining the Ring of Fire 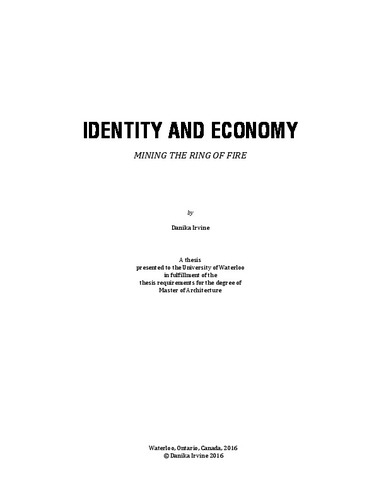 When the price of oil fell in 2014, Canada’s economy suffered. Even now, two years later, companies continue to drop their prices to stay competitive, as the global supply of oil remains great without any corresponding demand. No end has been predicted for the declining price of oil, which means the country must consider investing in new opportunities to generate revenue. Canada has been dependent on the exportation of its natural resources since its founding, from fur to lumber to minerals; the mining sites in Ontario’s Far North, dubbed the Ring of Fire and hailed as the province’s own oil sands, represent the next logical investment. However, the current model of temporary settlements used at resource extraction sites requires rethinking, as these settlements promote extraction based on a shadow population of transient and predominantly male workers, and permit mining companies to exploit both the land and local populations. While boomtowns may present a more permanent alternative, the First Nations communities are not suited for the explosive growth mining will bring to the region. This thesis proposes a new settlement typology for resource extraction, in which workers embrace a mobile lifestyle of mining operations, moving from one mining site to another with their families according to the lifespan of the extraction in a given region of the Ring of Fire. Parts of the settlement are designed for constant population fluctuation, while others are designed for permanence, forming a resilient economic core to stabilize the resulting community. Local ways of life, such as hunting and fishing, are merged with the resource extraction requirements of the settlement and supplemented with social gathering spaces, operation monitoring and education programs, all in order to create a community conscious and considerate of the land it occupies, benefiting the region socially and economically. A new hybrid landscape is created using the byproducts of extraction to create productive networks throughout the region: these byproducts will increase connectivity and the circulation of various resources, such as electricity and drinking water, both of which are currently lacking in the underserviced communities of Ontario’s Far North. Ultimately, this thesis explores what a settlement providing maximum benefits to both an existing and newly-embedded population—as well as benefits to the country as a whole, through the resulting economic activity—might look like. This thesis also explores the reincorporation of a community into its surrounding landscape once extraction is complete. What architectural elements (pieces or entire buildings) should remain for the benefit of the communities? What elements can be entirely removed and relocated to other resource extraction sites? And can pieces of architecture be left behind to enhance landscape for those who will remain to inhabit the land? The Ring of Fire has the potential to be so much more than a mining operation, but this requires an accompanying vision of settlement to successfully integrate it within its larger context.