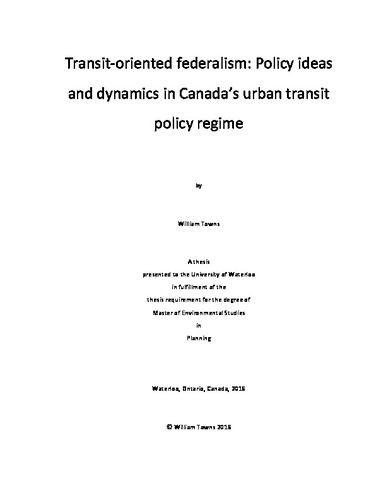 Canada remains the sole G8 country lacking a national-scale policy and institutional framework for funding and planning urban transit projects and operations, largely due to a constitutional division of powers granting transit responsibilities to provinces and municipalities. However, Canada’s growing municipal infrastructure deficit and the benefits of predictable senior-level transit funding on ridership, urban productivity, and equitable mobility observed internationally have led civic organizations, scholars, and politicians to advocate for the adoption of such a framework in Canada. Rather than develop a “best-case” national-scale framework for urban transit in Canada, this thesis focuses on the history of federal involvement in urban transit policy-making. This work begins to fill gaps in Canada’s planning and federalism literature about the role of “policy ideas” (referring to the organized principles and causal beliefs in which policy alternatives are embedded) in Canada’s urban transit “policy regime” (referring to coalitions of actors and institutions from multiple disciplines and jurisdictions sharing tangible interests in a complex policy problem). The overarching research question asks: How have the policy ideas informing the role of the Government of Canada in Canada’s urban transit policy regime changed over time? Via a review of historical literature, components of the policy regime in three discrete historical periods are described. These temporal divisions also structure a thematic content analysis of 60 documents produced by federal agencies and their representatives. In this analysis, the policy ideas invoked by federal agents on the subject of urban transit in Canada from 1968 to the present are characterized in accordance with a framework developed by Campbell (1998), involving paradigms, programs, frames and public sentiments. The specific modes of policy change at critical historical junctures in the analysis are also classified in relation to Howlett and Cashore’s (2009) framework for understanding policy dynamics. Key findings emerging from this analysis relate to the links between the role of paradigmatic ideas and federal policy change; the unintended consequences of a capital-funding focus in federal programs; an overriding respect for provincial jurisdiction and priorities evidenced in program descriptions and framing statements across analytical periods; and the growing influence of municipal actors in federal transit agenda-setting. This thesis offers urban planners grappling with transit-related issues insight into the intricacy of federal-municipal relations in Canada, an important consideration given the transit priorities of Canada’s newly-elected government. It characterizes the conditions under which policy has shifted in the past, providing a platform to determine how the federal role might evolve to reflect Canada’s changing sociopolitical, economic, and environmental landscapes. Indeed, a number of recommendations regarding the appropriate role for the federal government in Canada’s urban transit policy regime are presented, including: the creation of a permanent intergovernmental “transit council” with responsibility for overseeing long-term federal programs; the establishment of more stringent funding criteria to limit political influence on project selection; the development of a system for providing ongoing operational support; and the expansion of individual transfers and benefits.