Evaluation of the Behaviour of Continuously Galvanized Rebar 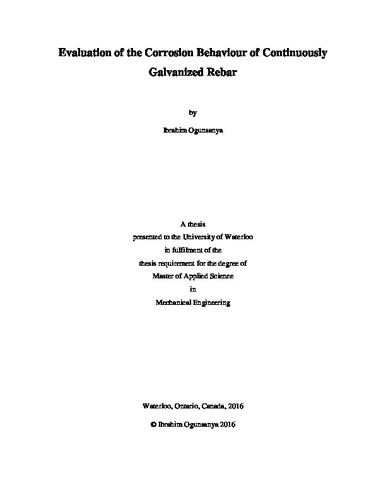 De-icing/anti-icing salts used during the winter season are the major culprit in limiting the durability of reinforced concrete structures. The salts induce corrosion of rebar, by penetrating the concrete and breaking down the protective film formed on the steel in the high alkaline environment of the concrete. Since the corrosion products occupy a volume larger than that of the corroded steel, they crack the concrete. The use of more corrosion resistant alloys is one method of improving the durability of reinforced concrete structures. Conventional hot-dipped galvanized steel (HDG) is an economical alternative to black steel mainly because: the zinc coating has a higher chloride threshold and, when the bar eventually corrodes, it provides additional protection to the base steel through its sacrificial anode effect, its corrosion products are soluble and do not crack the concrete, and it forms a stable protective film even in low pH concrete. However, its major drawback is the brittle and less corrosion resistant (than pure Zn) Fe-Zn intermetallic compounds (IMC) formed in the coating. To remedy this, a ductile pure zinc coating produced by a continuously galvanizing process has recently been developed. Small amounts of aluminum are added to the zinc bath with the goal of forming an Fe-Al inhibition layer between the steel and the zinc coating. In this project, three prototypes of the continuously galvanized rebar (CGR) grades, C1, C2 and C3 were electrochemically assessed, using galvanostatic pulse (GP) and linear polarization resistance (LPR) techniques, to evaluate and compare the corrosion behaviour of these bars against HDG and black steel. A second goal of the project was to identify the characteristic electrochemical potentials of HDG steel and CGR coatings to provide similar guidelines to those provided by ASTM C876 for assessing the probability of corrosion of uncoated carbon steel rebar in the field. All bars were cast in both non-cracked and cracked concrete, and exposed to a multi-chloride brine solution locally available and used across Ontario, Canada. Metallographic examination performed on the galvanized bars showed the non-uniformity of all coatings, particularly the CGR grades - some regions which were significantly less than the specified thickness, and some others were too thin to be detected. The coating thickness on the tested HDG, C1 and C2, and C3 bars were in the range of 105 – 250 µm, 15 – 60 µm, 5 – 33 µm respectively. The aluminum content of the C3 bars, ~9%, was similar in range to “Galfan” steel. After weekly electrochemical testing for 64 weeks, the results showed that the C3 performed the same as black steel in both passive and active state. The C1 and C2 bars performed the same as HDG bars in the passive state and three to five times better than black steel in the active state. The HDG bars exhibited ten times better “corrosion performance” than black steel in both passive and active state. The time to corrosion initiation was not determined in the present project, as a result, “corrosion performance” is defined as the active corrosion rate after initiation. The electrochemical behaviour of galvanized bars has been attributed to their zinc thickness and/or the presence of significant aluminum content in the coatings. The corrosion product of the high Al containing bar, C3, appeared to affect the bonding between the bar and its concrete, which then negatively affected the electrochemical behaviour of the bar. To characterize the corrosion potentials of these galvanized bars, the passive and active corrosion potential values of all galvanized bars were in the range of -266 to -382 mV vs SCE and -345 to -686 mV vs SCE, respectively. Moreover, the HDG and C3 rebar grades are in the upper and lower end of the ranges, respectively. The potential guideline developed for accessing probability of corrosion of black steel in concrete suggests that when the potential is more positive than -335 mV vs SCE (or -410 mV CSE), there is low probability of corrosion, when it is more negative than -385 mV vs SCE (or 460 mV vs CSE), there is high probability of corrosion, and an uncertain region exists between these potentials.