Just and Unjust Sanctions: The Case Study of Iran 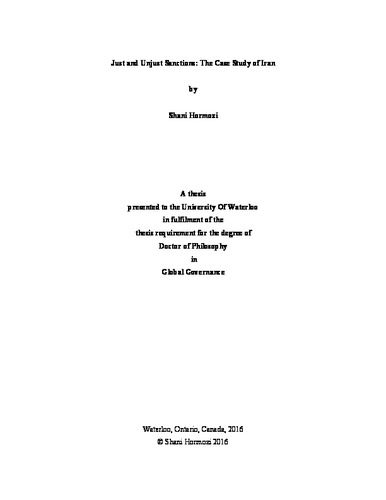 This dissertation aims to accomplish two major goals: 1. To provide a theoretical framework for studying and evaluating justice in sanctions by modifying and expanding the Just War Tradition (JWT); 2. To apply this theoretical framework, Just Sanctions theory (JST), in order to study justice in sanctions on Iran. Accordingly, first I introduce a new theoretical framework: Just Sanctions Theory (JST), and then I use the theory to explore the degree to which the authorization and implementation of sanctions against Iran have been just. In this analysis, it is important to distinguish, compare and contrast the sanctions authorized by the United Nations (UN) from those authorized by the US and the EU. I carry out this analysis realizing fully that the contexts of UN and non-UN sanctions on Iran are deeply intertwined. The findings of this research substantiate my hypothesis that the authorization of non-UN sanctions against Iran has not been just and that non-UN sanctions have not been implemented justly. In contrast, I argue that both the authorization and implementation of UN sanctions on Iran were less unjust. At the same time, however, I show that the impacts of sanctions against Iran from all three sources, in general, have been overarching and indiscriminate. Furthermore, I examine the degree to which the rapid globalization of transnational economic connections facilitates to this day the deep and destructive living conditions of the citizens of Iran. Such conditions have emerged as a consequence of the sweeping and crunching impositions of sanctions. Lastly, given the recent developments in Iran’s nuclear case and the partial sanctions relief Iran has received, I briefly analyze “Just Post Sanctions” in the case of Iran. In carrying out the necessary research, I have conducted both field research (in Iran) and library research (primary and secondary sources); in addition, I have devoted a portion of my research to the content analysis of statements by both sides (sanctioner(s) and target) as well as content analysis of sanctions-related documents.