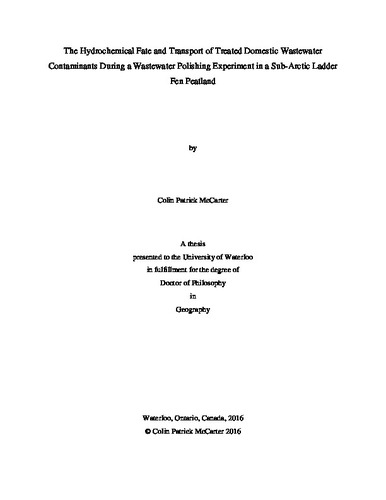 Protecting northern aquatic ecosystems is critical to ensuring the sustained use of these environments; however, with increasing industrial and residential development pressures in this region the safe and effective treatment of domestic wastewater is becoming a concern. Globally, peatlands have been used successfully to treat and polish domestic wastewater in northern environments but there is a dearth of knowledge on contaminant transport in peatlands, specifically reactive contaminants; such as the constituents of domestic wastewater. Ladder fens act as the conveyers of water, and likely solutes, from the bog peatlands to the aquatic ecosystems and similar systems have been used for domestic wastewater treatment. Ladder fens consist of a pool-rib-pool topography where the flow of water is governed by the peat ribs and their associated microtopography. Within a given rib, there are two distinct microtopographies: topographically high ridges that impede water flow and topographically low preferential flow paths that enhance water flow during periods of high water tables. Thus, the hydrological, and potentially solute, connectivity is thought to be controlled by the surface elevation of the low-lying preferential flow paths. However, the mechanisms governing the hydrological connectivity of these systems is still relatively unknown. Furthermore, there is limited knowledge on the processes and mechanisms that govern the fate and transport of contaminants, such as domestic wastewater, in ladder fens. Understanding the processes and mechanisms governing the hydrology, solute transport, and contaminant removal is critical to safely and effectively using these systems for domestic wastewater treatment or polishing; thus, is the primary objective of this thesis. To elucidate these processes and mechanisms in ladder fens, a continuous experimental simulated-domestic wastewater release occurred in 2014 (day of year 192 – 243) with an associated hydrological load (2014 – 38 m3 day-1 and 2015 – 30 m3 day-1) in a small sub-arctic ladder fen (EXP Fen) in the James Bay Lowland, Ontario, Canada approximately 100 km west of Attawapiskat. Typical domestic wastewater contaminants, nitrate (7.6 mg L-1), ammonium (9.1 mg L-1), and phosphate (7.4 mg L-1), were injected into the EXP Fen, along with sulphate (27.2 mg L-1), sodium (25.3 mg L-1), and chloride (47.2 mg L-1) to better mimic local domestic wastewater conditions. Given that sulphate can enhance the methylation of mercury in peatlands, total dissolved mercury (THg) and methylmercury (MeHg) concentrations were measured at the EXP Fen in addition to the hydrological and biogeochemical conditions throughout the summers of 2014 and 2015. Prior to the experimental loading the background geochemical and hydrological conditions were monitored in 2013 at the EXP Fen and at 3 nearby reference sites (2013 – 2015). The flow of water and solutes in ladder fens depends on the hydraulic conductivity and transmissivity distributions within the peat ribs and the surface elevation of the low-lying preferential flow paths. The low-lying preferential flow paths typically had higher hydraulic conductivity within the upper 0.1 m of the saturated peat than equivalent elevation in the ridges. Yet, overland flow events vastly increased the hydrological connectivity and runoff ratios exceed 1 during these events (when excluding the pumped water). Once overland flow occurred, the rate of water movement from the top of the system to the bottom decreased from weeks to hours. However, when the water table resides within the upper peat layers rapid conservative solute (chloride) transport was observed. The high hydraulic conductivity (16 – 598 m day-1) in upper peat layers resulted in high conservative solute velocities (1.9 m day-1), while adsorptive (sodium) solute velocities were only slightly lower (1.1 m day-1). Although the solute velocities were high, it was still lower than the average linear groundwater velocity (2.1 m day-1), resulting in a retardation factor of 1.2 for chloride and 2.1 for sodium. The retardation factor for chloride, a conservative solute, greater than 1 was likely due to diffusion into the inactive porosity of the peat (0.29 – 0.44). This processes likely influenced all contaminants studied. Similar to other treatment or polishing peatlands, the EXP Fen was highly effective at removing all contaminants from the pore water and no contaminants were detected at the site outflow. Nitrate was only transported 0.5 m into Rib 1, while ammonium (0.3 m day-1) and phosphate (0.2 m day-1) were transported further, yet were still relatively immobile. Initially, phosphate was completely immobile but the system saturated towards phosphate, resulting in a mobile contaminant. Sulphate, unlike the other contaminants, was very mobile (1.3 m day-1) within the EXP Fen, more similar to chloride and sodium. Additionally, within the sulphate plume elevated THg and MeHg concentrations were observed compared to background and reference site concentrations. Methylmercury, as a percentage of THg, comprised 80 -100 % in the pore water but no MeHg was observed at the site outflow. The enhanced generation of MeHg and THg is potentially a concern when using ladder fens as wastewater polishing or treatment peatlands due to the high mobility of sulphate. However, the efficient removal of all contaminants from the pore water suggests that ladder fens may be suitable for domestic wastewater treatment. Nevertheless, ensuring the water table is below the high hydraulic conductivity layers would greatly decrease the transport rates, thus increasing treatment, allowing for the safe operation of ladder fens as treatment wetlands.