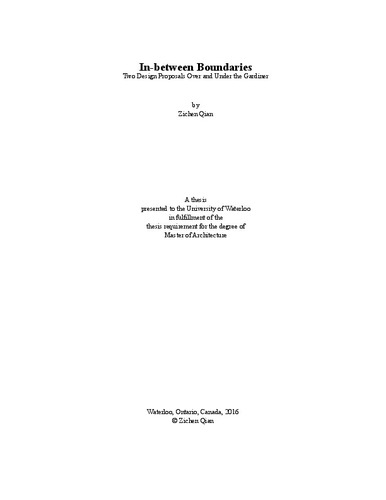 While the highway infrastructure of North America provides great benefits by connecting both urban and rural communities, this infrastructure also comes with significant costs by separating and creating barriers between various communities. The Sunnyside beach area in Toronto is an example of an important public area isolated by the Gardiner Expressway from the neighborhoods of Swansea, Sunnyside, Roncesvalles Village, and Parkdale. This thesis explores two prototype strategies for urban and architectural interventions on two sites in the Sunnyside area by both bridging over the Gardiner Expressway and traversing underneath it, as an approach that could be applied in other key locations along arterial urban highways. Implementation of these reconnection strategies would provide an opportunity to add significant new activity programs in the Sunnyside area. The programming and spatial character of former recreation activities and facilities at Sunnyside are used within a process of urban memory retrieval to organise the proposed new buildings. Within the buildings, interior boundaries - walls between rooms - are eliminated as static space dividers and replaced as expanded functional space. In-between Boundaries offers a systematic perspective for analysing a range of design scales for the built environment from urban design to site and building design scales and, in so doing, proposes an enhanced degree of complexity and continuity in architectural design.