Quaternary Geomorphology of the Quebec North Shore, Godbout to Sept-Iles 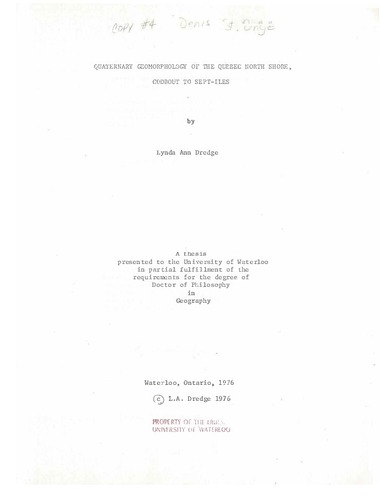 This report presents a summary of the physical properties of surficial deposits, evolution of the landscape and economic aspects of the materials. Surficial geology maps of the Sept-Iles and Cap Chat map sheets, at a scale of 1:125,000, accompany the text. The work was carried out by field investigations and air photo interpretation, combined with laboratory analyses of samples collected. The Quaternary deposits of the North Shore are the product of the last glacial episode and postglacial processes. The main materials are gravelly till and outwash, estuarine nearshore deltaic sand and offshore clay, littoral sand, aeolian sand, peat and alluvium. Evidence from striae and flutings, indicator mineralogies and till fabrics indicates that the main direction of ice flow was towards the south-southeast over the entire area, although there is evidence of an earlier and a very late easterly flow along portions of the south coast adjacent to the Laurentian Trough. Deglaciation occurred about 10,000 years ago at Sept-Iles. The marine limit is at an elevation of 130 min that area but declines towards the southwest to 100 mat Godbout. From the time of deglaciation the landscape above the marine limit was altered by the deposition of a thin layer of gravelly granitic till as the ice sheet retreated northward. A belt of moraines extending across the field area from the Toulnustouc River to the Moisie River marked interruptions in the retreat. Below the marine limit the landscape evolved through the deposition of a marine offlap sequence. Large coalescing deltas were built into the Goldthwait Sea during the first 1500 years after deglaciation. Rock flour was carried out into the offshore environment and was deposited as banded or massive silty clay. Landslides occur where these deposits are presently found at, or near, the surface. A tentative correlation of events and materials has been suggested by comparing the results of this study with those in other areas of the Gulf of St. Lawrence, the St. Lawrence Lowlands, and the Labrador Plateau. Direct correlation is difficult because of the large distances involved and the shortage of chronological control on the North Shore. The morainic belt is directly linked to moraines reported to the west and east of the field area.