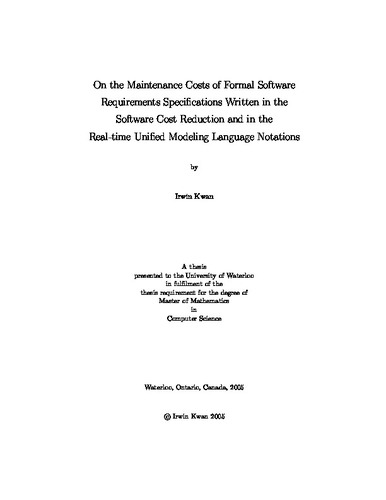 A formal specification language used during the requirements phase can reduce errors and rework, but formal specifications are regarded as expensive to maintain, discouraging their adoption. This work presents a single-subject experiment that explores the costs of modifying specifications written in two different languages: a tabular notation, Software Cost Reduction (SCR), and a state-of-the-practice notation, Real-time Unified Modeling Language (UML). The study records the person-hours required to write each specification, the number of defects made during each specification effort, and the amount of time repairing these defects. Two different problems are specified&mdash;a Bidirectional Formatter (BDF), and a Bicycle Computer (BC)&mdash;to balance a learning effect from specifying the same problem twice with different specification languages. During the experiment, an updated feature for each problem is sent to the subject and each specification is modified to reflect the changes. <br /><br /> The results show that the cost to modify a specification are highly dependent on both the problem and the language used. There is no evidence that a tabular notation is easier to modify than a state-of-the-practice notation. <br /><br /> A side-effect of the experiment indicates there is a strong learning effect, independent of the language: in the BDF problem, the second time specifying the problem required more time, but resulted in a better-quality specification than the first time; in the BC problem, the second time specifying the problem required less time and resulted in the same quality specification as the first time. <br /><br /> This work demonstrates also that single-subject experiments can add important information to the growing body of empirical data about the use of formal requirements specifications in software development.