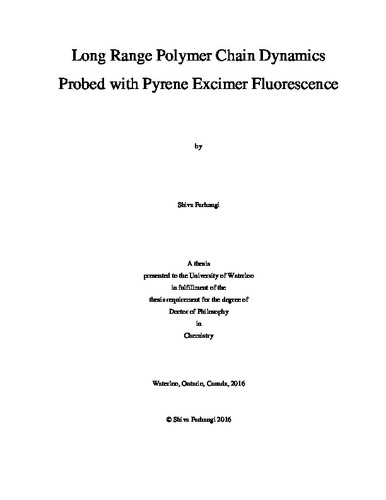 A series of fluorescently labeled vinyl polymers bearing a C1-C18 side-chain (namely poly(methyl methacrylate), poly(butyl methacrylate), poly(octyl methacrylate), poly(lauryl methacrylate), and poly(stearyl methacrylate) were synthesized and their polymer chain dynamics (PCD) were characterized by applying the Fluorescence Blob Model (FBM). This report is the first example in the literature where the PCD of actual polymers are being compared as a function of the polymer chemical composition. The study of these polymers having large Mn values in the 170,000-810,000 g/mol range was accomplished by labeling these samples randomly with pyrene. The FBM takes advantage of the ability of the dye pyrene to form an excimer. Global FBM analysis of the pyrene monomer and excimer fluorescence decays yielded the blob size Nblob and the rate of pyrene excimer formation inside a blob from the product kblob×Nblob. In the future, the body of results found in this study is expected to become a reference for other polymer dynamics studies, including protein chain dynamics, influenced by the bulkiness of different side-chains. Secondly, we designed a functionalized pyrene derivative, namely 1-pyrenemethoxyethanol (PyMeOEtOH), that remains sensitive to solvent polarity. The 0-0 pyrene vibronic transition is symmetry-forbidden for pyrene, and in non-polar solvents the fluorescence intensity corresponding to this transition is low. Typically, the modification of pyrene with a reactive substituent destroys its symmetry, therefore functionalized pyrene derivatives lose their sensitivity to solvent polarity. In this work, the I1/I3 ratio of PyMeOEtOH was determined in 20 different solvents and the I1/I3 ratios were similar to those of the unmodified pyrene molecule. The product kblob Nblob retrieved from the FBM analysis remained the same regardless of the pyrene-labeled polymer. Therefore, PyMeOEtOH has the ability to probe the polarity of its local environment, and its use to probe polymer chain dynamics yields similar results as those obtained with PyButOH. In the third part of the study, four different pyrene-labeled polymers were prepared by radical copolymerization of n-butylmethacrylate (BMA) and 1-pyrenemethyl methacrylate, 1-pyrenemethoxyethyl methacrylate, 1-pyrenemethoxyethoxyethyl methacrylate, and 1-pyrenemethoxydiethoxyethyl methacrylate to yield PyEG0-PBMA, PyEG1-PBMA, PyEG2-PBMA, and PyEG3-PBMA, respectively. The number of atoms in the side chain of the pyrene-labeled copolymers increased from 3 in PyEG0-PBMA to 12 in PyEG3-PBMA. Steady-state fluorescence was used to monitor the efficiency of excimer formation while time-resolved fluorescence was applied to investigate and describe the kinetics of diffusive encounters between excited and ground-state pyrenes as a function of spacer length. In turn, FBM analysis of the fluorescence decays provided a means to represent how the volume probed by an excited pyrene and the kinetics of pyrene excimer formation were affected by the length of the spacer connecting pyrene to the main chain. The strong effect that the side chain length had on pyrene excimer formation in the PyEGX-PBMA samples suggests that pyrene excimer fluorescence could be an excellent technique to probe the conformation of highly branched macromolecules such as dendrimers or polymeric bottle brushes in solution. Fourthly, different pyrene-labeled constructs were studied in four different organic solvents using steady-state and time-resolved fluorescence. The Model Free Analysis (MFA) was used as a mathematical model to determine the diffusional rate constant of excimer formation for the end- and randomly labeled pyrene constructs with different architecture from linear to branched. This study established a universal calibration curve from the absolute value of IE/IM plotted as a function of <k>, the aveage ate constant of excimer formation.