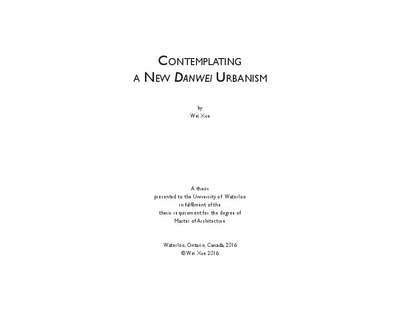 Market-driven Capitalist urbanization is no longer a viable option for China as it has produced increasingly monotonous and segregated cities that deny culture, history, ecology, and human connection. Cultural efficiencies generated from the interconnection and proximity of distinct entities found in traditional and Socialist-Era Chinese urbanisms have been overlooked in favor of market-oriented efficiencies from Western urbanization patterns. The thesis argues that China needs to develop a post-Capitalist Socialist urbanism in which efficiency is based on a shift in orientation from formulaic compositional systems to open-ended layered systems that encompass the dialectical complexity of the city. Socialist- Era Danwei Urbanism is revisited for its potential to facilitate efficiencies from the sharing of resources between various parts of daily life existing in the same urban block. The danwei (work unit) is a walled community containing the workplace, subsidized employee housing, and social amenities within an urban block. Many danwei, however, have moved some housing and amenities into areas far from the workplace rather than densifying the existing site. A New Danwei Urbanism builds density in a process of disintegration and formation, gives presence to absent ecologies, and establishes collectivity with a network of covered spaces while respecting autonomy at the local level. It embraces a dialectical reading of the city as a unity of contradictory yet interdependent systems. These layers present an alternative approach in which the danwei facilitates informal social and intellectual exchanges in the urban block.