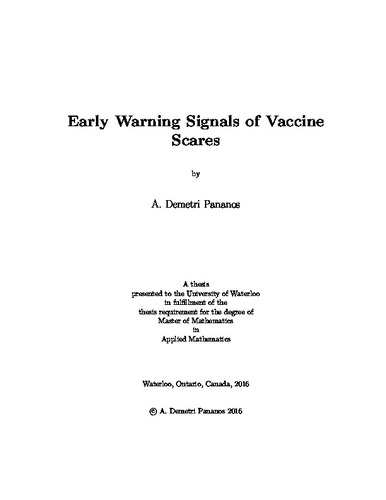 There exists strong evidence that vaccines are extremely effective in the prevention of pediatric infectious disease, yet despite this evidence, vaccine refusal is still popular amongst some parents. Existing mathematical models of disease and vaccinating dynamics are parsimonious with post scare empirical data, yet lack the ability to predict when a scare will occur. This thesis frames the problem of predicting when a vaccine scare is imminent as a problem in bifurcation theory and critical transitions theory. As a system of differential equations nears a bifurcation point, the system experiences critical slowing down, a loss in resilience to small perturbations from equilibrium. This loss in resilience manifests itself as an increase in the variance and lag-1 autocorrelation of the time series. Using an existing model for vaccinating dynamics, I demonstrate this critical slowing as the system bifurcates from a state of high vaccine coverage to a state of suboptimal vaccine coverage. I also demonstrate that critical slowing can be detected in the population by using the social media site Twitter and Google Trends data. It will be shown that leading to the 2014 measles outbreak in Disneyland, a statistically significant increase in the lag-1 autocorrelation in the time series of tweets with anti-vaccine sentiment is detected. Post outbreak, a statistically significant decrease in the lag-1 autocorrelation is detected, suggesting that population comes sufficiently close to a vaccine scare to elicit outbreaks in those individuals who ceased vaccinating. The results of this thesis provide new tools to monitor vaccine sentiment and maintain vaccine coverage.