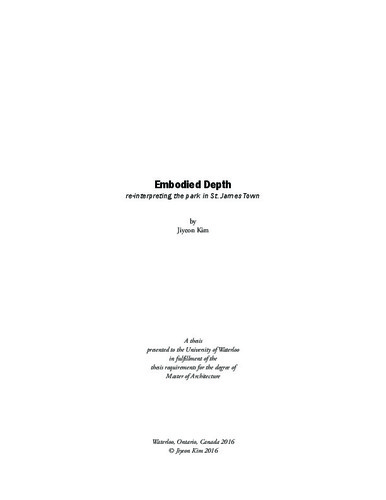 The thesis reflects on the loss of slowness and experiential depth in the age of acceleration. The “contrived depthlessness” of modernity – as described by Frederic Jameson– can be traced back to contemporary culture’s fixation with appearances, surfaces, and instant impacts. Modern architecture favors enticing forms and transparency at the price of tactility and the slow unfolding of spaces. Based on the author’s personal experience of tactile spaces within the city, and a reflection on the existing body of literature on places of stillness, the thesis identifies landscape engagement and layered threshold as the main approaches to generating embodied depth within the city. St. James Town in Toronto, a cluster of post-war tower block that serves as a gateway community for many newcomers, is marked by an extreme spatial flatness and anonymity. Harsh delineation of private and public realm hinders inhabitants’ connection with the city and fellow city-dwellers. St. James Town’s notable flatness is rooted in the 1920’s urban planning vision of Towers-in-the-Park, which is described by Le Corbusier as “a city made for speed”. For this reason, it is through the implementation of meaningful social interaction and landscape engagement on this site that the potential for architecture to generate embodied depth can be evaluated. Based on the fundamental value of a deep embodied space as a catalyst of memory and spatial appropriation, the thesis proposes a series of landscape and spatial layers at multiple scales including: an urban block, individual towers, and pocket gardens. The resulting diversity of paths and social programs encourage the inhabitants’ participation and appropriation of the cityscape. The thesis deems that the ethical role of architecture in the age of acceleration is to restore the natural slowness of experience and strengthen our sense of the real.