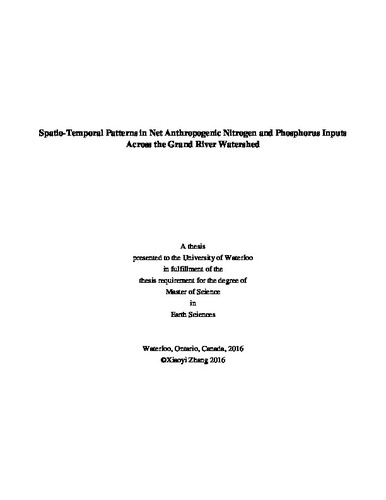 Over the last century, human activities have dramatically increased the inputs of nitrogen (N) and phosphorus (P) to land, resulting in increased eutrophication of aquatic systems, and degradation of drinking water quality. Although many changes in management have been adopted to mitigate these impacts, little improvement has been observed in water quality. Multiple N and P mass balance studies have indicated imbalances between inputs and outputs of N and P in anthropogenic landscapes. In this work, historical (1901-2011) N and P budgets for the Grand River Watershed (GRW) in southwestern Ontario were developed using the NANI/NAPI (net anthropogenic N/P input) framework. NANI was calculated as the sum of four different components: commercial fertilizer N application, atmospheric N deposition, net food and feed imports, and biological N fixation. A similar budgeting method was used to estimate NAPI, which includes fertilizer P application, net food and feed imports and detergent P use by humans. Relevant data was obtained from the Canadian agricultural census, Environment Canada, and literature estimates. Our results showed that annual NANI and NAPI values increased approximate 2-fold since 1901, with peak net inputs in 1986 and 1976, respectively. Increases in NANI over time can primarily be attributed to high atmospheric N deposition, fertilizer N application and biological N fixation, while increases in NAPI are primarily due to increased fertilizer P application. Spatially, the hotspots for both NANI and NAPI have since the early 1950s shifted to the central sub-watersheds of the GRW, which can be attributed to greater urbanization and agricultural intensification in the central area. The historical NANI and NAPI estimates obtained for the GRW provide insights into the spatio-temporal patterns in NANI and NAPI, and can facilitate better N and P management strategies.