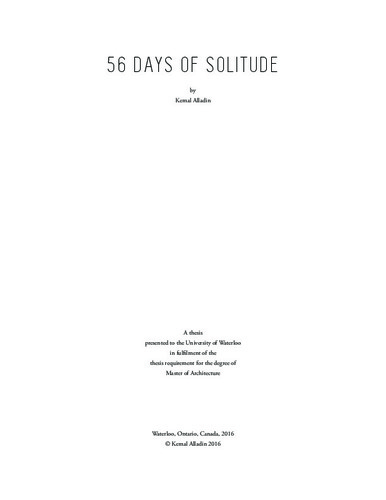 Man is a social animal. He needs community for support and for the success of his life. Yet, throughout history, man has withdrawn from community to retreat into the wilderness. The journey takes him from the world, into solitude, and then back to the world again with the fruits of his experience. This thesis participates in the tradition of solitude. It begins nearly five years ago with a sketch in a notebook of a trailer in the forest. Below the drawing, a question from Henry David Thoreau’s Walden: “What sort of space is that which separates a man from his fellows and makes him solitary?”[1] Over the next three-and-a-half years, the idea for solitude is cultivated and develops before I transform a 1970’s Grand Air Travel Trailer into my own solitary space. Then, on May 24, 2015, with the trailer as my shelter, I withdrew to the shores of the Spanish River in Northern Ontario, learning solitude for fifty-six days. When I returned from my retreat, for the next four months, I lived out of the trailer in the driveway of my childhood home, producing this book by assembling entries and illustrations from various journals and notebooks I kept during my isolation. The final leg of my journey struggles to find answers in my retreat, and to Thoreau’s questions. In solitude, the relationship between man and his space is the mechanism which separates him from the world, and at the same time, the stage on which the drama of his self-discovery is played out.This thesis explores architecture as the backdrop of solitude, and my relationship to the vessel that makes me solitary.