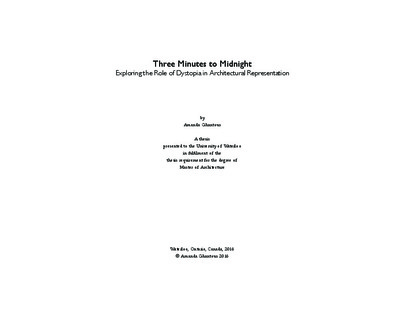 In the early 20th century, architects and planners, dissatisfied with the overcrowded and deteriorating state of large cities and inspired by the seemingly infinite possibilities offered by new technologies, began to propose their own visions of the ideal city that they believed would cure all of society’s troubles. Boldly described and drawn, many of these proposals were considered breakthrough solutions and inspired generations of architects. But like traditional utopias, these idealistic planning schemes, though undeniably influential, failed to acknowledge the realities of the contemporary city or its inhabitants, inspiring the creation of some of the most disastrous and widely-criticized projects in architectural history. In response to the widespread failure of these projects and believing that their implementation was responsible for the creation of static and lifeless architecture, a new generation of architects proposed provocative theoretical projects that challenged traditional architectural design methodologies and re-examined the relationship between architecture and society. Their goal was not to impose their visions for how the world should be but rather to express the world as it is in order to foster new ways of thinking that could inform a more dynamic architecture in tune with the realities of its inhabitants. Today, the disconnection between the idealized image of utopia and reality is most commonly found in the proliferation of hyper-realistic architectural renderings. Advanced digital manipulation technologies have given architects the unprecedented power to “realistically depict the impossible,” leading “clients and the public at large to expect from architecture and architects a degree of quality – perfection – that is impossible to deliver in the real world”[1] which is putting the profession of architecture at risk of becoming less relevant through its reduction to a purely aesthetic role that does little to address the more troubling aspects of contemporary life. This thesis is an exploration of the disconnection between the idealistic presentation of the world as depicted by utopian-fueled architecture and the everyday reality of human behaviour. By combining the power of dystopian fiction with architectural representation, this thesis is an attempt to imagine the world that architecture doesn’t want to represent but never the less creates. [1] Belmont Freeman, “Digital Deception”, Places Journal, May 2013, https://placesjournal.org/article/digital-deception/