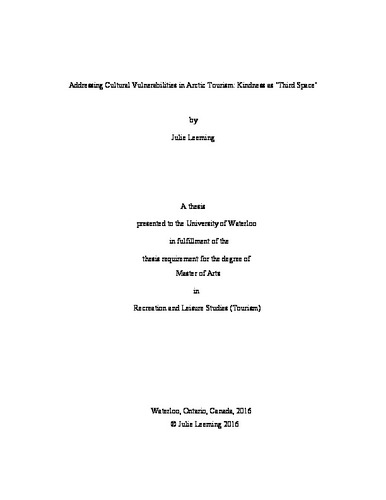 The changing climate and its impending impacts on Northern regions has ultimately initiated increased interest in Arctic tourism, providing tourists with a rationale for travel to these regions before they deteriorate further, or completely vanish (Lemelin et al., 2010; Hall & Saarinen, 2010). Previous research examining impacts of tourism in Arctic regions denotes that when tourism is introduced into rural and sparsely populated arctic regions, local communities may become overwhelmed by the influx of visitors, causing various forms of social tension, and more prominent feelings of invasion and vulnerability (Fay & Karlsdottir, 2011; Kajan, 2014). While there is evidence that tourism can easily foster impersonal and hostile relationships between tourists and host populations, it is imperative to also recognize that trust and understanding between cultures in tourism can exist in situations or encounters where tourists and hosts can move beyond the prescriptions or constructions that solidify cultural difference, and beyond “the constraints of a dominant hegemonic culture,” into what is termed the third space – a space that creates an intercultural context for symbolic interaction (Wearing & Wearing, 2006, p. 153). Using tourism in Iceland as a context, this thesis seeks to define and discuss the third space framework through the narratives of Icelandic hosts and visiting tourists, and their positive encounters of kindness and responsibility. Results of this ethnographic inquiry revealed that such encounters do have the potential to bridge initial feelings of cultural difference and vulnerability, ultimately creating a space of mutual understanding and cultural learning between the host and tourist, and enabling increased resiliency among the host population. This study also revealed specific social/cultural, spatial/environmental, and temporal circumstances enabling kindness to function in a tourism context.