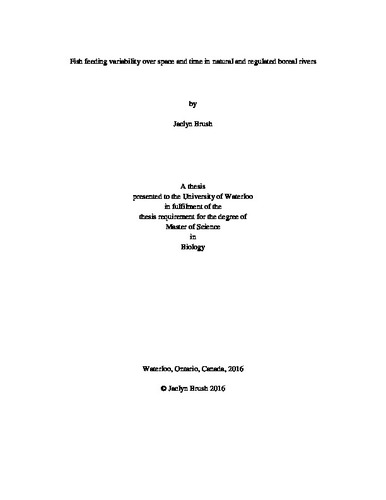 Within the boreal region of Canada, river ecosystems are affected by naturally low flows in the summer months and hydropower operations, which can greatly influence the structure and function of river food webs. Few long-term studies exist that assess spatial and temporal variation in fish feeding in natural and regulated boreal rivers. Such studies would provide improved understanding of the role that temporal and spatial scale plays in the interpretation of how environmental influences such as flow affect food aquatic webs. The overall objective of this thesis was to examine factors affecting fish feeding in natural and regulated rivers, at over short and long-term and also within multiple river reaches. In Chapter 2, fish feeding niche and stable isotope composition were compared over two reaches and ten years within the Batchawana River (a natural boreal river in northern Ontario), and in relation to flow metrics such as mean, minimum and maximum flow and temperature. Fish δ13C and δ15N were found to be temporally invariant in upstream and downstream river reaches. Feeding niche was temporally invariant only at the lower Batchawana River reach, with a significant increase in feeding niche observed through time for the upper river reach. There was only one significant correlation between the standard deviation of δ15N and the standard deviation of mean daily flow, but no other significant correlations between fish isotope composition (δ13C or δ15N) and select flow metrics. In Chapter 3, two rivers in south-central Newfoundland allowed for comparison of stomach contents, stable isotopes and feeding niche in normal and low flow years. During a low flow year, feeding niche decreased in the natural river and was not significantly different from that of the regulated river. The work within this thesis provides a better understanding of how fish feeding varies over space and time in natural and regulated rivers and in response to normal and low flows.