Continuing the Narrative of Silo No. 5 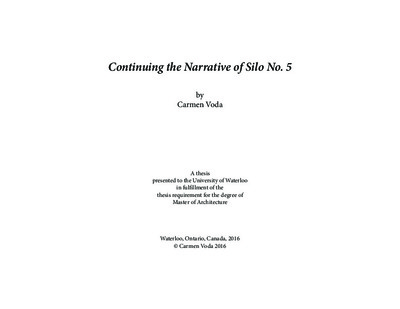 Every modern city faces the challenge of how to engage the remains of its industrial past. Consciously or unconsciously, post-industrial cities have experienced a type of identity crisis after the decline of industries. Sites that once played a significant role in shaping their urban character are no longer economically productive. Some say these sites are akin to ancient ruins; however, the question of establishing an authentic connection between the contemporary city and its industrial past remains a cultural and architectural challenge. The Lachine Canal in Montreal is a significant relic of Canadian industry. In the 19th century, industries were drawn to its edges to access water for both production and transportation of goods. Today, these obsolete machine-like structures lie dormant. Among them is Silo No. 5, which is located at the mouth of the Lachine Canal flow as it spills into the St. Lawrence River. Monumental in scale, the once productive structure has the magnitude of a great cathedral. Admired by European modernist architects and historians, grain elevators like Silo No. 5 were identified as iconic structures of 20th Century architecture. This thesis seeks to re-invent and re-integrate Silo No. 5 into the contemporary city by reconciling its multiple identities. The intent of this thesis is to understand not only the Lachine historic site, but also to celebrate the sublime atmosphere and the architectonic qualities of Silo No. 5. Two questions guide this exploration: “is it possible to re-introduce something obsolete back into the city?” and “how can we maintain the sublime power of the iconic industrial structure while at the same time allow it to become animated?”