The Structures and Properties of Protonated Phenylalanine Derivatives 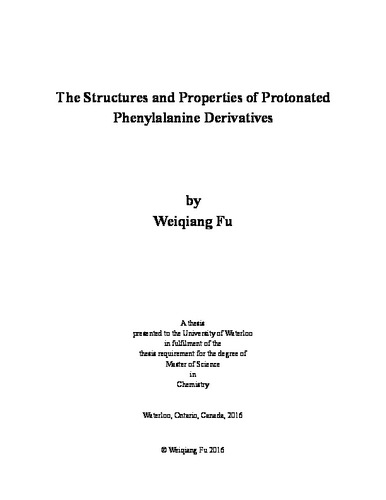 Non-covalent interactions influence the 3-dimentional structures of large biomolecules. Hydrogen bonds, π-π stacking and cation-π interactions play a prominent role in protein folding and molecular recognition. In clusters peptide, and proteins that contain phenylalanine (Phe), the cation-π interaction arises from the interaction of the quadrupole charge distribution of the phenyl group with a positively charged species. By varying substituents around the phenyl ring one can potentially tune the cation-π interaction, even going so far as to invert the ring’s quadrupole moment, thus changing the cation binding motif. To explore the effects of electron donating/withdrawing groups on the non-covalent interactions of Phe clusters, ionic clusters including Phe, Phe derivatives, proton-bound dimers of Phe derivatives, and Phe dipeptide were investigated in a combined experimental and computational study. The low-lying isomers of various clusters of Phe were identified using the Basin-hopping (BH) search algorithm and optimized with density functional theory (DFT). The predicted harmonic vibrational spectra were then compared with experimental spectra obtained via infrared multiple photon dissociation (IRMPD) to determine cluster geometries.