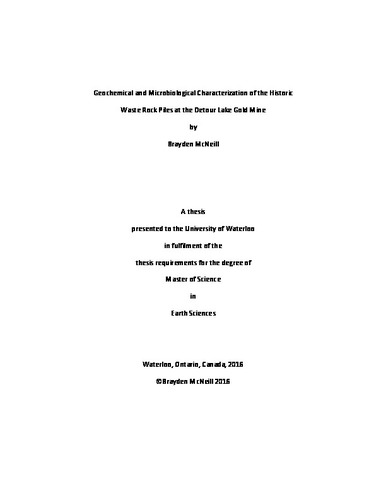 Four of the historic waste rock stockpiles (WRS #1-#4) at the Detour Lake mine site were studied to determine the potential for generation of acid rock drainage (ARD). The stockpiles were constructed during the original mine operations (1983 - 1999) and were covered with 1 - 1.5 m of local overburden in 2000 to provide a reclamation cover. Waste rock was composed primarily of plagioclase, horneblende, quartz and clinochlore, with small amounts of biotite. The principal sulfide minerals identified were pyrite and pyrrhotite, with small amounts of chalcopyrite and covellite. Measurements of sulfur content ranged from 0 - 2.2 wt. %, whereas the carbon content ranged from 0 - 2.5 wt. %. The neutralization potential ratios (NPR) of WRS#1 and WRS#2 ranged from 0 - 61.1 with an average of 1.6 and 0.7 in profile excavation samples. Over 50 % of samples from WRS#1 and WRS#2 were potential acid generating (PAG). WRS#3 and WRS#4 were slightly less sulfidic resulting in average NPR of 43 and 10, respectively. None of the samples from WRS#3 were PAG, and 45 % of WRS#4 samples were PAG. The hydrology of the piles is typical of waste rock piles, with a large unsaturated zone. The water tables at WRS#3 and WRS#4 are approximately 16 and 22 mBGS, respectively. The waste rock is usually near residual saturation (5 vol. %), but the passage of wetting fronts commonly increased moisture content to near matrix saturation (~25 vol. %). The cover material retains more moisture than the waste rock, and usually 10 - 20 vol. %. Thermal profiles indicate that both stockpiles remain > 0 ˚C throughout the year, except within the cover. Seasonal fluctuations in temperature are dampened and delayed with greater depth in the stockpile, except near the edge of WRS#4 where the cover was damaged suggesting the cover plays a role in regulating the temperature of the stockpiles. Air-permability testing of the cover material and waste rock indicates that the cover material impedes advective gas and heat flow. Waste rock at WRS#3 and WRS#4 had air-permeability coefficients of 10-9 - 10-10 m2, whereas the cover material had air-permeability coefficients of approximately 10-11 m2 indicating that air flow through the cover is primarily by diffusion. This observation is in agreement with pore-gas trends at WRS#3 which show O2 depletion and CO2 enrichment with depth. Pore gas at WRS#4 is at atmospheric concentrations throughout, since the destruction of the cover material has removed the barrier to advective gas flow. The results of pore-gas monitoring indicate that the installation of a simple, unengineered cover made from local material may be a cost-effective tool in the management of sulfide oxidation and potential ARD generation at this site. Pore-water quality at WRS#3 and WRS#4 is characterized as neutral mine drainage, and compares favourably to other neutral mine drainage sites. The pore-wate throughout WRS#3 and WRS#4 is neutral pH. Concentrations of SO42- between 200 and 1500 mg/L are caused by sulfide oxidation. Circumneutral pH and depletion of alkalinity in the unsaturated zone indicate that acidity released through sulfide oxidation is neutralized through carbonate dissolution. Pore-water at both piles was saturated with respect to calcite and dolomite. Metal concentrations (i.e. Al, Cu, Fe, Mn, Ni, Zn) in the unsaturated zone were usually < 100 µg/L. Pore-water at WRS#3 and WRS#4 are oversaturated with respect to several secondary Fe and Al minerals including Fe(OH)3(a), goethite, gibbsite and diaspore, which provide controls on the concentrations of dissolved Fe and Al. Secondary covellite (CuS) was observed throughout the stockpiles, suggesting that covellite formation may constrain Cu concentrations. Pore-water samples were undersaturated with respect to secondary Cu, Ni and Zn minerals, indicating that these metals are likely removed from the aqueous phase through adsorption or complexation to Fe-hydroxides. Elevated concentrations of Fe (> 1000 µg/L) and Mn (> 500 µg/L) below the water table at WRS#4 indicate that these metals are released by reductive dissolution of Fe and Mn oxides. Overall the concentration of dissolved metals in the pore-water of WRS#3 and WRS#4 is much lower than concentrations measured at other sites characterized by neutral mine drainage. Several genera of fungi were identified in the waste rock of WRS#1 using 18S rRNA analysis, including Pycnopeziza, Leptosphaeria, Tetracladium and Cucurbitaria. None of the encountered fungi were ubiquitous or have been shown to impact pore-water geochemistry through sulfide oxidation. Bacterial enumerations were performed on samples from WRS#1 to evaluate the presence of iron and sulfur oxidizing organisms. The enumerated species are common waste rock bacteria including acidophilic sulfur oxidizers (Thiobacillus thiooxidans and related species; SOBa), neutrophilic sulfur oxidizers (Thiobacillus thiparus and related species; SOBn) and acidophilic iron oxidizers (Acidithiobacillus ferrooxidans and related species; FeO) oxidizers. The most numerous were FeO with an average abundance of 9.0x105 bacteria/g. The average abundance of SOBn was 5.5x105 bacteria/g. The SOBa were much less numerous with an average abundance of 1.2x103 bacteria/g. A 16S rRNA analysis confirmed the presence of Thiobacillus and Acidithiobacillus species. Bacterial diversity was greatest in samples of the cover material. Unoxidized waste rock samples were usually characterized by a dominant iron or sulfur oxidizing genera even at neutral pH (i.e. Thiobacillus), whereas oxidized and acidic waste rock samples saw a shift to a dominant acidophilic genera (i.e. Acidithiobacillus).

Brayden McNeill (2016). Geochemical and Microbiological Characterization of the Historic Waste Rock Piles at the Detour Lake Gold Mine. UWSpace. http://hdl.handle.net/10012/10861