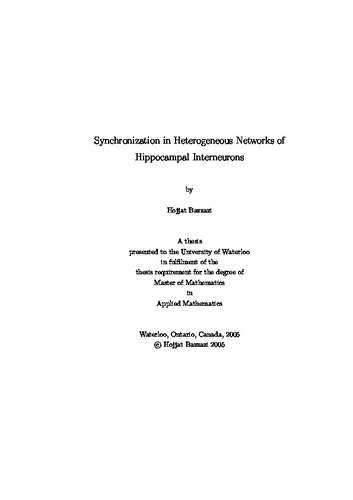 The hippocampus is one of the most intensely studied brain structures and the oscillatory activity of the hippocampal neurons is believed to be involved in learning and memory consolidation. Therefore, studying rhythm generation and modulation in this structure is an important step in understanding its function. In this thesis, these phenomena are studied via mathematical models of networks of hippocampal interneurons. The two types of neural networks considered here are homogenous and heterogenous networks. In homogenous networks, the input current to each neuron is equal, while in heterogenous networks, this assumption is relaxed and there is a specified degree of heterogeneity in the input stimuli. A phase reduction technique is applied to the neural network model of the hippocampal interneurons and attempts are made to understand the implications of heterogeneity to the existence and stability of the synchronized oscillations. The Existence of a critical level of heterogeneity above which the synchronized rhythms are not stable is established, and linear analysis is applied to derive expressions for estimating the perturbations in the network frequency and timing of the neural spikes. The mathematical techniques developed in this thesis are general enough to be applied to models describing other types of neurons not considered here. Possible biological implications include the application of high frequency local stimulation to alleviate the synchronous neural oscillations in pathological conditions such as epilepsy and Parkinson's disease and the possible role of heterogeneity in controlling the rhythm frequency and switching between various cognitive states.