An EMG-Driven Cervical Spine Model for the Investigation of Joint Kinetics: With Application to a Helicopter Pilot Population 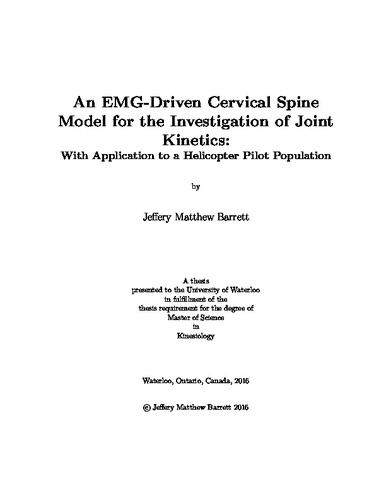 As the workforce has been shifting from manufacturing to office work, reports of neck pain have been on the rise. Unfortunately, the mechanism for the development of chronic neck pain still remains disputed. Most current cervical spine biomechanical models are aimed at the simulation of whiplash and are forward models employing the finite element method or multibody dynamics that are ill-equipped for incorporating motion capture data, with even fewer models capable of interfacing with electromyography (EMG) data. Therefore, there is a considerable opportunity to develop an inverse dynamic model that can drive muscle forces using EMG with the goal of determining the joint mechanics that could lend insight to the loading patterns and injury mechanics in the cervical spine. The current model is an inverse dynamic multi-body model of the whole cervical spine, head, and thorax. It was created entirely in Python, using anatomical data obtained from the Anatomography project, which were rescaled to match dimensions from a 50th percentile male. Constitutive expressions for ligaments are described by nonlinear springs, while the disc and facet joints are lumped into exponential rotational springs. Active muscle forces are estimated from EMG using a Hill-type muscle modeling framework. The model has endured a rigorous validation procedure comparing its predicted compression and shear values to a previously published model. The gains for each muscle were analyzed to evaluate how well muscle forces are being predicted from EMG. Finally, a sensitivity analysis was conducted to identify if the outputs of the model were overly dependent on the numeric value of a specific parameter. Overall, compression and mediolateral shear values were in good agreement with the previous model, while anteroposterior shear values were significantly smaller in magnitude. Despite this, muscle gains were, in some cases, alarmingly high. Finally, the sensitivity analysis revealed that the model is somewhat sensitive to ligament and muscle slack lengths, albeit to a much lesser extent than previously published models. The model was used to evaluate the change in joint kinetics with a flexed posture compared to a neutral one. With 45 degrees of flexion, compressive forces increased twofold throughout the cervical spine. In addition, anteroposterior shear tended to increase fourfold in the upper cervical spine, however, equalized with a neutral posture around the C4-C5 level. These findings may have implications for injury mechanisms, as a flexed posture under compression has been strongly associated with the development of posterior disc prolapse. In addition, the model was used to assess the joint kinetics from an existing data set on helicopter pilots who are required to wear night vision goggles during night flights. The classic solution to the anteriorly placed weight of the night vision goggles has been to counterbalance it with a posterior counterweight. While this works theoretically in a neutral posture, once a deviated posture is assumed, joint kinetics correspondingly increase. Adding a helmet increased the compression at C5-C6 from 204 N to 258 N, a 26% increase. Furthermore, adding night vision goggles and a counterweight increased it by 60%. Increasing the mass of the head-segment leads to an increase of compression.

Jeffery Barrett (2016). An EMG-Driven Cervical Spine Model for the Investigation of Joint Kinetics: With Application to a Helicopter Pilot Population. UWSpace. http://hdl.handle.net/10012/10858