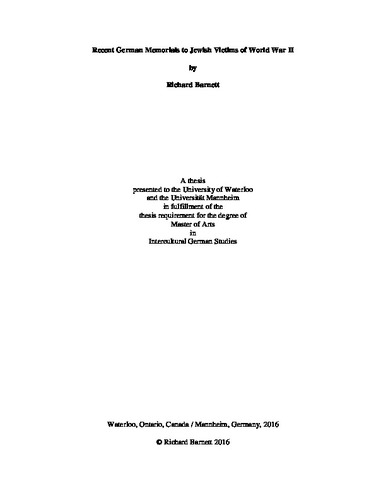 The following thesis examines four 21st-century German memorials that commemorate the deported and murdered Jewish people of Europe during World War II: Jochen Kitzbihler’s Glaskubus (2003) at Paradeplatz in Mannheim, Janet Cardiff and George Bures Miller’s Alter Bahnhof Video Walk (2012) at the Hauptbahnhof in Kassel, Horst Hoheisel’s Das Gedächtnis der Gleise (2015), also found at the Hauptbahnhof in Kassel, and Luigi Toscano’s Gegen das Vergessen (2015) which was initially exhibited at the Alte Feuerwache in Mannheim. I argue that the works in question are modern examples of counter-memorials that utilize forms and media technology of the 21st century that demonstrate a significant shift from the forms of commemoration implemented by the 20th-century counter-monument artist. This thesis relies on the theories and research of a number of scholars. Background history and knowledge of German counter-memorials was provided by scholars such as James E. Young and Andreas Huyssen through their work on several 20th-century counter-memorials from the 1980s and 1990s, those being Jochen and Esther Gerzes’ Harburger Mahnmal gegen Faschismus (1986) in Hamburg-Harburg, and Horst Hoheisel’s Aschrottbrunnen (1987) and Denk-Stein-Sammlung (1993), both located in Kassel. Young and Huyssen’s discussions concerning the use of traditional monumental forms to commemorate Holocaust victims and the invisibility of these traditional monuments have been taken into consideration when examining the four chosen works. To better understand the historical and cultural importance of the chosen memorials and the victims of whom they commemorate, information has been drawn from Aleida Assmann’s discussion concerning the four formats of memory (cultural, individual, social, and political memory). Likewise, Suzanne Keen’s work on narrative empathy in art and literature has been applied to the examination of the works in order to better understand the ways in which the presentation of story and narrative about the victims may stimulate reflection and generate emotional reactions from viewers. These theories are necessary to determine the ways in which the chosen works could be considered provocative and reflective, and whether or not these memorials demonstrate forms and techniques of commemoration that have not been exhaustively used by the 20th-century Holocaust memorial artist. By examining the four recent German memorials in relation to the work that has previously been conducted concerning German counter-memorials of the 20th century, I conclude that 21st-century German counter-memorials are becoming more personalized, more commemorative of individuals rather than a generalized group of victims. There has also been an increase in recent German memorials that utilize media technologies such as photography and audio and video recording technologies as a way of conveying information about historical events, delivering story and narrative, and promoting reflection in the viewers. Artists of Holocaust memorialization have been working with such forms and techniques in order to help viewers, especially those from younger generations, establish a better acknowledgement and understanding of these historical events, the people affected, and the magnitude of life and culture that was lost.