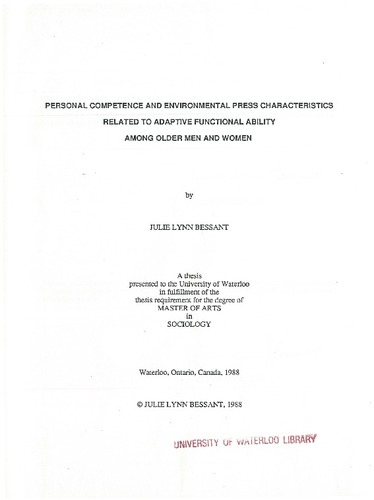 Independence is highly valued in society at any age. Maintaining that independence remains a goal that is carried into old age. Among the community elderly, independence is often measured by the ability to satisfactorily complete a variety of everyday activities that are essential for sustaining life and household. Despite its prominence in social gerontological studies, little is known about the factors that influence the ability to function independently. This study addressed this gap by investigating the role of a number of factors in determining functional ability among older men and women. The study of behavior, such as functional ability is consistent with a developing theoretical perspective known as the person-environment transactions paradigm. This paradigm implies that behavior is a function of a complex set of relations between and among the older individual and his/her surroundings. This study applied the P-E paradigm as a framework to further understand the behavioral outcome of functional ability. Using data from the Region of Waterloo Accommodation Survey, the study investigated two specific research questions including, which relationships existed between and among the person and environment factors with respect to functional ability and to what extent did these factors directly and indirectly affect functional ability. Since the P-E process was expected to differ between older men and women, two models were estimated according to gender. The associations within each model were tested using path analysis. This statistical technique was chosen because it allowed for the investigation of the processes depicted in the ecological equation associated with the P-E paradigm, B=f(P ,E,PxE). The analyses suggested that the P-E process resulting in functional ability was different for older men and women. The environmental press factors affecting IADL included perceived support, accessibility, actual support and living arrangement. In contrast, only one personal competence variable, perceived health was associated with IADL in the model for women. In the model for men both perceived health and age were observed to be related to IADL. While these direct paths varied in magnitude across the models, the more notable contrast was the difference in the type and number of associations observed between the independent variables. This observation indicated that the process influencing functional ability was more complex for women than men. In this process, age, perceived health and actual support received played integral roles. Furthermore, the environmental press dynamics were more complex in the women's model. The role of income and accessibility also varied between the models, supporting the notion that financial and transportation limitations are particularly problematic for older women. This fact is exacerbated at the societal level by the greater proportion of women in the older age groups. This study demonstrated that the degree of chronic illness was not the sole determinant of functional ability but, that other personal and environmental factors contribute to the subjective evaluation of independence in functional ability. Furthermore, it suggested that gender was a contextual variable influencing the P-E process. The practical implications of these insights into functional ability are that health and social service intervention strategies can be refined in order to better meet the needs of the men and women who comprise the older segment of the population.