Heroism "at a Pinch:" The Story of the Structures of Middle-earth 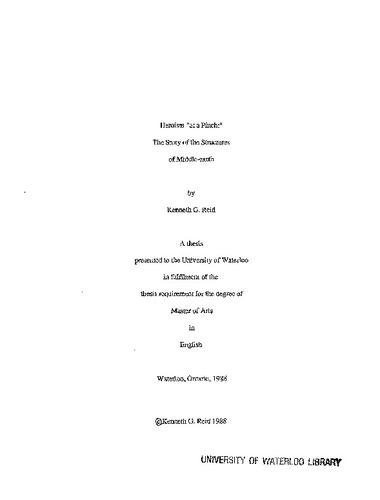 Discussions of the heroic element in J.R.R. Tolkien's The Lord of the Rings generally focus on Frodo and/or Aragorn. But Sam Gamgee is in some ways the best representative of the sort of heroism that Tolkien most admired, the heroism of the ordinary. Tolkien believed that ordinary people, doing their task with devotion and to the best of their abilities, are most deserving of admiration. This idea is rooted in his Christian beliefs, which hold that the servant is more to be honoured than the lord. Tolkien has attempted, in The Lord of the Rings, to give this paradox concrete representation in a fictional world, and, despite the obvious problems and inconsistencies of doing so, has built this idea into the structures which form the book. This thesis makes use of three structural models to see how Tolkien accomplishes his objective. The first, the formal model, examines the overall shape of the story, using the scope of characterisation, historical sweep, and geographical expanse to provide the dimensions of that shape. The second, the oppositional model, is a treatment of Tolkien's use of the basic opposition between Good and Evil, and suggests that, though this opposition is the most obvious and ubiquitous, it is only the background for the primary story, which is the journey of Frodo and Sam. The third model is narratological, observing the effects of the way the tale is communicated on the tale itself. The final chapter is an attempt to draw some conclusions about the role of Sam Gamgee, based on the observations of the previous three chapters.