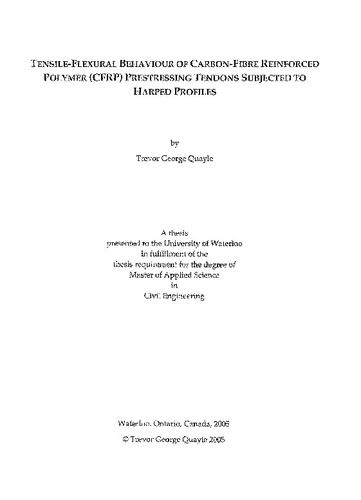 External post-tensioning can provide an effective structural reinforcement system for the design of new concrete structures and for the strengthening of existing structures. In most cases, the structural effectiveness of the external tendon is increased by using a deviated or harped tendon profile. Carbon-fibre reinforced polymer (CFRP) reinforcement has emerged as an alternative to steel because it is non-corroding and fatigue resistant. However, its use in external post-tensioning has been limited due to a lack of knowledge regarding the tensile-flexural behaviour of the tendons under typical harped profiles. Limited test data has shown a reduction in the tendon capacity resulting from the combination of tensile and flexural stresses at the deviator locations. Existing models for predicting the capacity of a deviated tendon appear to be either unconservative or excessively conservative, limiting the application of CRFP tendons as external post-tensioning. This thesis describes an experimental research study of the tensile-flexural behaviour of post-tensioned CFRP tendons subjected to harped profiles. The program studied the effect of tendon size, deviator size and harping angle on the tendon behaviour. The tendons were loaded to failure in a specially designed tension frame that accommodated a range of harped configurations. Both the flexural and overall behaviour of the tendon were observed and recorded throughout the tests. The experimental data illustrates the effect of harping variables on the tendon response and capacity, and reveals the potential for different failure modes dependent on the combination of variables. A comparison of the test data with existing analytical and design equations shows poor correlation between the predicted and measured values. The research program clearly points out the inadequacies of the current analytical models and the need for an analytical model that more accurately predicts the tensile capacity of deviated CFRP tendons. A primary and an extended model were developed within the research program based on the material properties and geometry of the tendon and structural mechanics. The new models were found to perform very well and were used to develop design equations for the reduced tensile strength of harped CFRP tendons as well as failure mode control guidelines for the avoidance of undesirable failure modes.