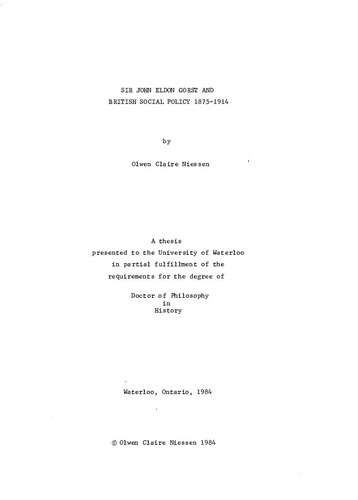 The period of Liberal rule in Britain between 1906 and 1914 is justly remembered for its social reforms. The "New Liberalism" of these years produced the social legislation which constituted the nucleus of what is now the British "Welfare State". These measures represented a reversal of the individualistic, laissez-faire doctrines of the nineteenth century, a reversal effected partly through the efforts of social investigators, partly as a result of hard-headed political expediency and the ambitions of particular Government ministers, and partly the Liberal Government's response to the threat of Socialism. These reforms also resulted from the efforts of various individuals and many of them, particularly those of Cabinet rank, such as Lloyd George and Winston Churchill, have received recognition from historians for their efforts. Other equally concerned and energetic reformers have virtually been ignored. One of these is Sir John Eldon Gorst. Through examination of Gorst's speeches in the House of Commons, his writings in the periodic press, and his communications to the Times, plus reports therein of his various activities connected with social reform measures, it is shown that Gorst made a significant contribution to late Victorian and Edwardian social legislation.