Biconfessionalism and Tolerance: The Peace of Augsburg in Three Imperial Cities 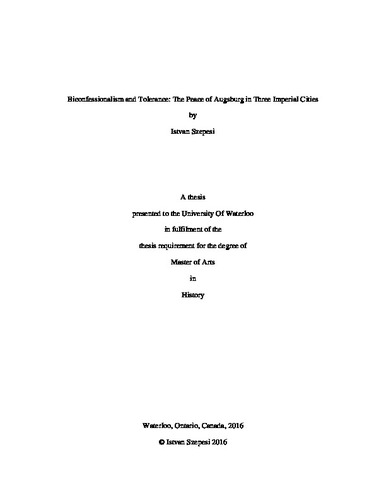 In contrast to the atmosphere of mistrust and division between confessions that was common to most polities during the Reformation era, the Peace of Augsburg, signed in 1555, declared the free imperial cities of the Holy Roman Empire a place where both Catholics and Lutherans could live together in peace. While historians readily acknowledge the exceptional nature of this clause of the Peace, they tend to downplay its historical significance through an undue focus on its long-term failures. In order to challenge this interpretation, this paper examines the successes and failures of the free imperial cities’ implementation of the Peace through a comparative analysis of religious coexistence in Augsburg, Cologne, and Nuremberg during the Peace’s 63-year duration. This investigation reveals that while religious coexistence did eventually fail first in Nuremberg and then in Cologne, the Peace made major strides in the short term which offer important insights into the nature of tolerance and confessional conflict in urban Germany during the late Reformation era.