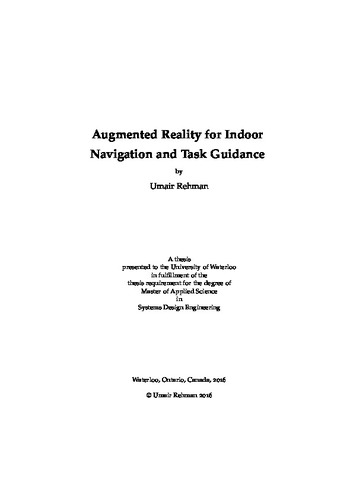 Modern augmented reality systems are becoming increasingly popular in different industrial sectors as augmented reality based applications can improve performance and reduce workload during operations. The efficacy of such systems, however, has not been comprehensively investigated from human factors and performance standpoints. This research explores the design, development and evaluation of augmented reality based prototype applications for two discrete domain areas which include indoor navigation (Part II) and procedural task support in nuclear power plants (Part III). Augmented Reality-Based Indoor Navigation: In the study, we introduced an augmented reality-based indoor navigation application that utilizes pre-scanned environmental features and markerless tracking technology to assist people to navigate in indoor environments. The application can be implemented on electronic devices such as a smartphone or a head-mounted display, providing both visual and auditory instructions. In particular, we examined Google Glass as a wearable head-mounted device in comparison to hand-held navigation aids including a smartphone and a paper map. We conducted both a technical assessment study and a human factors study to comprehensively evaluate the system. The technical assessment established the feasibility and reliability of the system. The human factors study evaluated human-machine system performance measures including perceived accuracy, navigation time, subjective comfort, subjective workload, and route memory retention. The results showed that the wearable device was perceived to be more accurate, but other performance and workload results indicated that the wearable device was not significantly different from the hand-held smartphone. We also found that both digital navigation aids were better than the paper map in terms of shorter navigation time and lower workload, but digital navigation aids resulted in worse route retention. These results could provide empirical evidence supporting future designs of indoor navigation systems. Implications and future research were also discussed. Augmented Reality-Based Task Assistance in Nuclear Power Plants: This research illustrates the design, development and human factors evaluation of an augmented reality based procedural task guidance system, implemented on a hand-held tablet device (ipad), in order to support nuclear power plant operators with main control room operations. After conducting an extensive literature review, we detail the development stages of our new application prototype that employs marker based tracking to superimpose computer generated instructions in the live view of the operators control panel. We had hypothesized that the augmented reality-based procedures would perform better than the traditional methods currently used in nuclear power plants that include computer-based procedures and paper-based procedures. A research study was devised and carried out that compared the three methods of procedural instructions. The performance evaluation and human factors study revealed that the augmented reality based prototype solution reduced operator’s workload, increased operators situation awareness, made processes efficient and less prone to errors and reduced inquiry communication. The results also led us to conclude that augmented reality based procedural assistance poorly supports memory retention and skill learning amongst operators.