Byron and Swinburne: Propagandists of the Risorgimento - The Manipulation of Historical Sources in Twin Dramatizations of Doge Faliero and Venetian Republicanism in 19th Century Italy 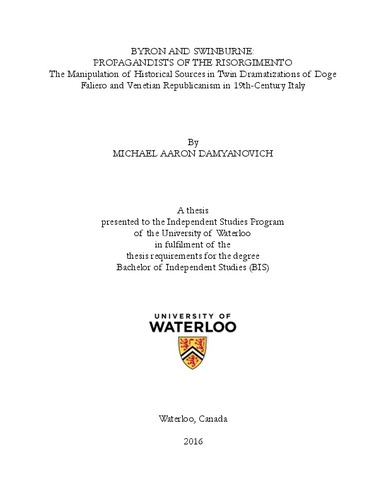 This essay will argue that Lord Byron manipulated historical sources on his fourteenth-century protagonist, Doge Faliero (died 1355), in order to write his historical drama, Marino Faliero: Doge of Venice (published 1821), as a piece of republican propaganda in support of Italy’s nation-building process (the Risorgimento), and that Algernon Swinburne’s rewrite of Byron’s drama, Marino Faliero (published 1885), perpetuated Byron’s manipulation of historical sources for the same purpose. This argument will proceed as follows: In writing his historical drama, Marino Faliero: Doge of Venice, Lord Byron covertly manipulated his supporting historical sources under the pretence of adhering to strict historicity. Byron did so in order to characterize Doge Faliero as a hero of Venetian Republicanism. In so doing, Byron dramatized the necessity of a people’s revolution in parallel visions of fourteenth- and early nineteenth-century Venice. Then, in rewriting Byron’s historical drama for late nineteenth-century Venice and post-unification Italy (after 1870), Algernon Swinburne developed Byron’s heroization of Faliero and updated the drama’s political representations. Swinburne did so in order to remodel Faliero after Giuseppe Mazzini (died 1872), the foremost Risorgimento leader of the effort to make the newly united Italy into a republic. Byron’s and Swinburne’s twin a-historic historical dramas about Doge Faliero served as republican propaganda throughout the Risorgimento, and they reflect more than a century of Venice’s major role therein.

Michael Damyanovich (2016). Byron and Swinburne: Propagandists of the Risorgimento - The Manipulation of Historical Sources in Twin Dramatizations of Doge Faliero and Venetian Republicanism in 19th Century Italy. UWSpace. http://hdl.handle.net/10012/10830