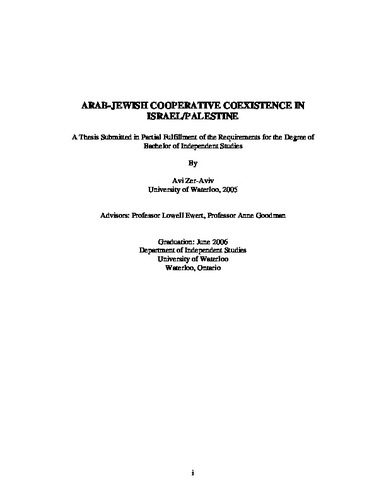 The current conflict between Arabs and Jews in Israel/Palestine has ruptured relations between the two peoples, and essentially divided them along geographic, economic, cultural, political, and sociological lines. Yet up until about a hundred years ago, these two peoples enjoyed a rich and deep shared history of coexistence, and lived together as neighbours in relative peace for centuries. This thesis is an attempt to uncover those memories, and use them to rekindle the tradition of cooperative coexistence between Jews and Arabs in that region. It comes from listening to the stories of my mother’s parents, both born in British Mandate Palestine, and from my own unique identity as a Canadian-Israeli-Palestinian-Algerian- Hungarian-Polish Jew and pagan. It comes from my own conflict of understanding the creation of the State of Israel as a rescue spot for Holocaust survivors like my father’s mother, and my discontent with religious nationalism and its racist dimensions. It is above all an affirmation that peace is an ongoing relational process worth cultivating, and will never be achieved so long as Jews and Arabs stay separate, segregated, and ghettoized within their respective communities.