Dissocation of Subjective and Objective Health Status in the Chinese Population 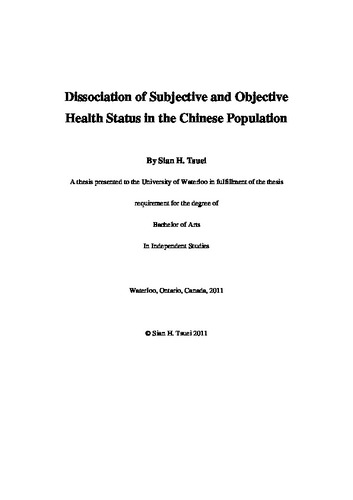 As the general Chinese population becomes more overweight, pressure mounts to explore the reasons behind this trend. Pooling four waves of the Chinese Health and Nutrition Survey (CHNS) into two groups—2004 with 2006 and 1997 with 2000—it was found that the higher socioeconomic status (SES) is positively correlated with perceived health status, but negatively correlated with objective health measures such as being overweight, diabetic, or hypertensive. Contrary to previous theories, in the Chinese population, higher SES is generally positively correlated with better health lifestyle knowledge, and less likelihood of daily use of alcohol and cigarettes. The negative correlation between higher SES and health may be due to increased opportunity cost of time. We find no evidence to support the idea that individuals with higher SES consume more sin goods such as alcohol and tobacco.