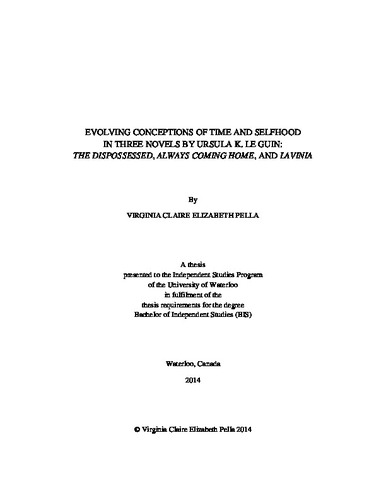 Since the 1970s, Ursula K. Le Guin has been widely recognized as an author who uses fiction as a means to address fundamental philosophical, political, and ethical questions. Of the many scholarly analyses of her work, however, relatively few consider the implications of her depiction of time and selfhood. Those which do, moreover, concentrate on certain texts and take a limited range of theoretical perspectives. In consequence, neither the enduring nature of Le Guin’s engagement with these issues nor the originality of her treatment of them is generally recognized. This thesis aims to begin redressing this gap by examining the ways in which time and selfhood are portrayed in three major works of speculative fiction, only one of which (The Dispossessed) has previously been considered from this angle. Through a series of close readings, I demonstrate that Le Guin’s depiction of these concepts differs in important ways both from the “common-sense” understandings of time and selfhood prevalent in Western societies and between the three works themselves. The result is a clear evolution, in which the relatively familiar ontological framework of The Dispossessed gives way to a radical reconceptualization of the nature of time and individual existence in Always Coming Home, followed by Lavinia’s subtle but profound reframing of the relationship between time, the individual, and the totality of which he or she is part. Drawing on scholarly analyses of Le Guin’s work, as well as writings from narratology, phenomenology, philosophy of time, and neuroscience, I show that each text constitutes a systematic working through of an alternative way of understanding our individual and temporal existence in the world. This, in turn, forms the basis for Le Guin’s ongoing and in- depth exploration of major ethical questions.