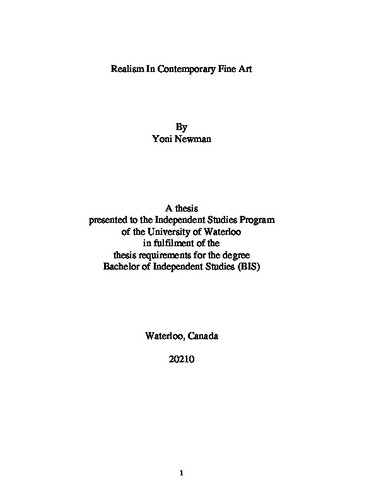 Usually I start out with a technical concept. I try to get as detailed as possible in regards to the logistics of how I'll carry out the work. The ideas themselves are quite intricate and so an intuitive approach to process isn't appropriate. Instead lots of research and a mapped out plan of action are required. I don't no longer think of art as an explorative process, except in the most general way. My approach is very exploitive. Most people think of artists as engaging in an activity that is essentially explorative, an open ended thing, the inquisitive mind journeying along uncharted creative waters. I believe this is a very narrow understanding of the process. There needs to be a managing consciousness that marshals resources and knowledge towards a desired end. The whole act of creation is a dance with chaos; where do the ideas come from in the first place? How are experience, knowledge, and history thrown together? How is the vaguest impression transformed into an actual real thing that everyone understands? How does the mind thread its way through various influences to arrive at unique conclusions? The source itself is unquantifiable; so why not rationalize as much of the process as you can? (One can never fully control it, but in trying to, one can at least come to understand it.) Of course it never does go as planned. In less than perfect attempts, one reaches a point where a decision needs to be made as to whether one should resolve a piece of art or continue trying to actualize what it was supposed to be. This was the point I reached with the Demoiselles des Avignon project on October 1 2009. I lacked the experience necessary to carry out the ambitious scheme as originally laid out, but at one point I did have an interesting and potentially successful painting. Integrity dictates that the artist sacrifice everything in pursuit of artistic truth. In this frame of reference there is no compromise, the vision must be realized (this presumes that the artist fully understands the vision at the outset, which I'm not at all sure is most often the case). However, on the ground, an artist is essentially a project manager, unlike anyone running anything, they must constantly evaluate risk versus reward. At what point do I throw the map out the window and look around? This moment hit me on October 1st, with a little over a month left and a lifetime's worth of work still to complete. The practical voice of compromise took over. I re-evaluated what I had achieved. Understanding that I could not complete this painting anytime soon I decided to scrap the methodology that I had employed over the Spring and Summer. The plan had been to produce three paintings of the same subject matter. Here's how they would have theoretically related to each other: (one) The Rubensian, baroque method would have relied largely on drawing skill, and manipulated layers of opaque/transparent paint layers to achieve a luminous sense of plasticity. (two) The modern realist painting was to rely largely on accurate colour relationships to do the heavy lifting with the drawing aspects were to be simplified to generalized shapes. (three) The third painting was going to be guided by an expressionist sensibility. It was not to rely on a particular method, but rather explore some interesting themes from the other two paintings to build up an interesting surface, one that did not rely so strictly on observation. This exercise was meant to explore the intricate relationship between aesthetic approach and subject matter, and this is where a piece succeeds or fails. It's where all the associative commentary happens- an extremely subtle, and tricky dialogue to truly understand. This cannot be so quickly mastered, through such diagramatic means (...by me...at this juncture in time). Sitting in front of me on October 1st, was a painting that resembled none of the 3 hypothetical scenarios described above. I had started one way and then lost focus, and began to rely on instincts where I couldn't solve technical problems. Thus, the work lacked the conviction of the "vision" it was meant to express. At this point I was trying to finish one painting within the remaining month. Seeing as the piece was already compromised, I then tried to hack through the remaining 20% of the painting. every desperate attempt seemed to bring me further and further away from the finish line1. At that point, I was looking at a piece that was utterly confused, and ought to be abandoned. This essay is an exploration of those issues, which I failed to do through painting.