Study of Effects of Design Modification in Static Mixer Geometry and its Applications. 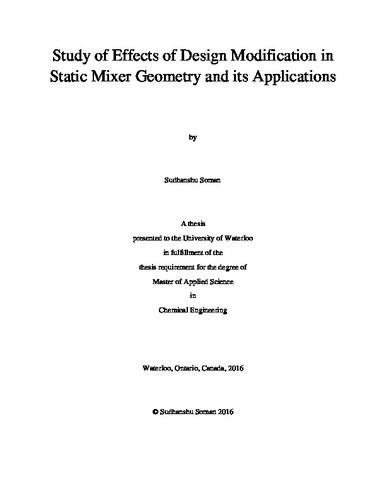 Mixing of fluids is one of the most important industrial operations. Static mixers, also known as motionless mixers, are very efficient devices used for mixing of both single phase and multiphase fluids. With a gradual increase in the usage of static mixers in various industrial operations, it is necessary to achieve higher mixing efficiency at the cost of minimum energy consumption. Mixing performance can be improved either by designing new internal geometry or by modifying an existing static mixer geometry. The objective of this research is to improve the mixing performance of static mixers by incorporating design modifications to the internal geometry. For that purpose, a static mixer with an open blade internal structure (such as SMX) was selected because of its complexed geometry and industrially proven mixing abilities. As a part of design modifications in the SMX mixer, perforations of varying sizes and different shapes of serrations were introduced to the static mixer blades using AutoCAD software. These modified static mixer geometries include perforated SMX with 2 holes of D/20 size on each blade, perforated SMX with 4 holes of D/20 size on each blade, perforated SMX with maximum number of D/20 holes, perforated SMX with maximum number of D/30 holes, perforated SMX with maximum number of D/40 holes, SMX with circular serrations, SMX with triangular serrations and lastly SMX with square shaped serrations. In order to select the best modified static mixer in terms of mixing performance, CFD simulations are performed using COMSOL Multiphysics software and the mixing performance of each modified static mixer geometry was compared with the standard SMX mixer. The mixing performance of each static mixer was compared on the basis of dispersive mixing and distributive mixing parameters. For laminar flow regime and incompressible fluid, simulation results for all the static mixers are first characterized in terms of pressure and velocity field, which showed good agreement with the literature data. For the comparison of dispersive mixing, shear rates and extensional efficiency of each static mixer is compared with that of a standard SMX mixer. Further, binary cluster particle tracer is injected in the flow domain to compute the distributive mixing capacity of static mixers. Distributive mixing of each mixer is quantified in terms of standard deviation. Based on the comparison of the simulation results for the dispersive and distributive mixing, the most efficient static mixer is targeted for its use in polymerization processes. Synthesis of polyacrylamide using a static mixer is explored in this research work. SMX mixer and the most efficient modified static mixer based on the overall mixing performance are chosen to carry out the homopolymerization of acrylamide using CFD simulations. It is observed that the modified static mixer performs better than the SMX mixer in terms of monomer conversion, reaction rate and polymer concentration.