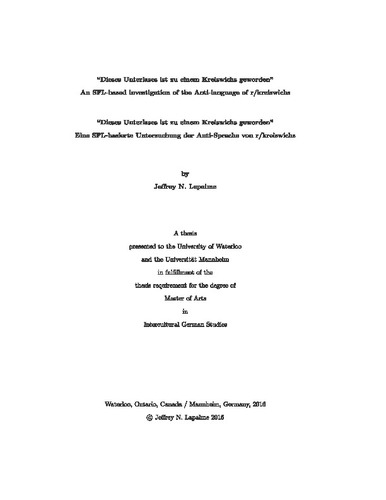 Reddit is a social-news-aggregator and online community with a large and active user-base from around the world. Although the main language of discourse on the site is English, Reddit’s highly diverse membership has enabled and fostered the growth of numerous language communities, each with their own specialised subreddits, group dynamics, and linguistic norms. One of the oldest and largest of these communities is the German-language community centred around the r/de subreddit. In recent years, a relatively small but dynamic group, has sprung up out of the German-language community to create their own subreddit r/kreiswichs, one which is ‘free’ from Anglicisms, and where any and every term can and should be translated into German. Using both quantitative and qualitative means within a framework of Systemic Functional Linguistics, I analyse a corpus of kreiswichs user submission and comment data from the calender year 2015 with the goal of investigating whether their unique take on the German language and internet terminology meets the criteria of an anti-language as initially set out in Halliday (1976). To that end, I compare the lexicon of kreiswichs to that of the broader German language Reddit community, analyse the qualitative elements of it, before moving on to its implementation and the discourse of user submissions in the subreddit.